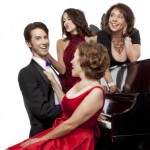 This weekend Phoenix Theatre offers its final performances of the all-Gershwin musical ‘S Wonderful, directed by Associate Artistic Director Robert Kolby Harper. “This kind of show is really hard,” he says, “not just for the director-choreographer but for the actors because they’ll change clothes 50,000 times, and they’ll sing 40 songs by the end of the night.”

Perhaps the number of wardrobe changes is slightly exaggerated, but ‘S Wonderful does cover more than 42 Gershwin tunes in its whirlwind tour of five time periods and locations. Mini-musicals take audiences to a 1939 Parisian café, a 1948 Hollywood movie studio, and New Orleans in 1957 – there’s a total of five vignettes of 15-20 minutes each, all sharing the same sleek but effective Art Deco-inspired set pieces.

If you’re searching for a deep, complex plot, don’t bother – the simple, timeless themes of yearning, attraction, romance, and love are carried on the thinnest of storylines. It’s all a vehicle for the rich music of the Gershwin brothers. And “if you’re looking for linear,” says Harper with a chuckle, “you’re screwed, because it’s not gonna happen.” He shakes his head and continues, “But that’s not how memories are; memories are collages, feelings…sometimes just snapshots.”

A tight, talented onstage three-piece combo of piano, bass, and drums plays nearly non-stop, providing not only accompaniment but also interludes between the mini-musicals and seamless segues between styles.

So many songs in such a relatively short show might create a dizzying, abbreviated effect, but Harper says that while “there are moments where it’s more snippety, there’s a big group of songs where you get a nice chunk.” A few of the numbers receiving more extended play include “Nice Work If You Can Get It” as well as selections from the Gershwins’ beloved folk opera. “[The songs] that I’m most excited about are from Porgy and Bess, because I get to sing a little bit on ‘There’s a Boat Dat’s Leavin’ Soon for New York,’” says actor Toby Yatso. “I’ll probably never be in a production of Porgy and Bess for racial reasons,” he continues, “so I think it’s fun to be able to experience those songs, that music, that score, even if it’s just a little taste…it’s a unique opportunity.”

Yatso is an Associate Artist at Phoenix Theatre, and serves on the faculty for Arizona State University’s Lyric Opera Theatre program (as does Harper). He’s won numerous ariZoni and Encore Society awards for his work onstage and as a director, teacher, and choreographer in shows like The Producers, Avenue Q, and Glorious.

“What I like about Toby is that he’s never satisfied with just bringing the same-old same-old,” explains Harper. “And he’s just awesome to work with – I laugh hysterically.” He smiles. “That’s one of my big things in rehearsal: if we’re not laughing, we’re going home, ‘cause life’s too short. We’re not curing cancer here, people – we’re doing a musical revue.”

“At the end of the day, if you’re in a revue, yeah – sing pretty, but you’ve got to be funny. It can’t all be about the voice, because I can get a CD and sit at home in my PJs and have a cocktail,” Harper continues. “So I want people who can be interesting to watch, and move you to feel something…lift the music off the page.” The cast also includes Kaitlynn Kleinman Bluth, Jenny Hintze, Kyle Erickson Hewitt, and Jenn Taber, who stars in ‘S Wonderful’s mini-musical “Of Thee I Sing,” embracing the role of an abandoned chanteuse. “Jenn’s one of the funniest women I’ve ever met,” says Yatso. “She can sing anything and is just so committed to everything she does…and it’s fun to work with her because we’re such different-sized people. And I love that – I just love the contrast of us.”

The 6-foot-5-inch-plus Yatso continues, “I think I’m known because of my height, and as a unique physical presence.” His character in the first vignette is a newsroom worker, a sort of silent movie standard with choreography making the most of Yatso’s build. “This is so much about the physical storytelling — I get to heighten all my physical attributes…and I have a lot!” he laughs wryly.

He’s delighted with all three of his female co-stars. “Jenny and I have danced together a lot – I always feel like she makes me look like a better dancer than I probably would be by myself,” Yatso chuckles. “And Kaitlynn…we always felt we were so connected onstage.” He smiles again, and exclaims, “When I heard it was those three women, I thought, ‘I am a lucky, lucky man!’”

‘S Wonderful includes plenty of dancing along with songs ranging from the less familiar (“My Cousin in Milwaukee”) to beloved favorites. “Of course you can’t have Gershwin without ‘Someone To Watch Over Me,’” says Yatso. Harper agrees; “I don’t know who can hear that song and not have a real visceral reaction to those lyrics.” He continues, “I think even now…even teenagers can listen to that and go, ‘Wow – yes, I feel that. That’d be awesome – I’d love to have someone watch over me like that.”

“And that’s the whole point,” Harper says. “That’s what music does, especially the Gershwins’ music – it connects people in ways that are meaningful, that are deeper than just dancing in the club. It boils down to love.”

Even as ‘S Wonderful leaves the stage, Phoenix Theatre prepares for the world premiere of another production: Love Makes the World Go ‘Round, based on the music of Bob Merrill, who wrote hits like “Mambo Italiano,” “If I Knew You Were Coming I’d’ve Baked a Cake,” and “(How Much Is) That Doggie in the Window?” as well as works for theatre and film like Funny Girl and Carnival. Merrill, who reportedly composed on toy xylophones, took his life in 1998 at the age of 74. “Love Makes the World Go ‘Round is set in a New York piano bar, where these three women have sort of wandered in,” explains Producing Artistic Director Michael Barnard. “They’re each in a different stage in their lives and their marriages – or ‘not-marriages’ – so they get into conversations with the help of the piano player…it’s a very funny piece.”

The tiny cast includes Jeannie Shubitz, Allison Houston, and Patti Davis, while the pianist is Brad Ellis, an arranger and accompanist for television’s “Glee,” who also worked with writer Duane Poole on the show’s arrangements.