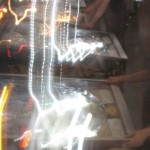 “There are artists in Las Vegas?” was the first thing I thought, without having a moment to realize how presumptuous I was being, as we turned the corner from Las Vegas Boulevard onto Charleston. My next thought was “Is that how people think of Phoenix?”

Up to this point, the most interesting sort-of cultural thing I knew and liked about Las Vegas was the Pinball Hall of Fame. I had spent many hours there and suffered the sore forearm muscles because of it. But here we were—driving through what looked like an area of galleries, studios and art spaces where just steps before were advertisements for nudes, weddings and, well, everything else. The Pinball Hall of Fame

I wondered how, in a world “slush bars”, miles of lukewarm buffet food, rampant gambling, and signs with instructions on how to operate a door, could there be a committed arts community? Regardless of all my prejudices, amidst all of this, it exists: a healthy and now corporate-sponsored First Friday event filling spaces and drawing crowds with future plans to bring in artists from outside the region. Zappos CEO Tony Hsieh believes in it so much that he and a few others purchased the trademark for the event. Even still, I thought “how cute”. Instructions on how to operate a door in Las Vegas, NV

Maybe this is how my artist friends in New York think when I tell them that no, really, there is this great artist community in Phoenix. We take care of each other and have purchased property, put on regular events, organized and raised money and draw crowds of thousands every month. Really, I swear, we’ve done all this. Maybe, while they smile their supportive smiles, in their minds they are patting me on the head and thinking “how cute”.

Maybe that is the same thing people in cities like Paris and London thought when artists in New York said “No, really, we have this great thing going on over here. The rent is cheap and we can put up a show anywhere we want.” Or maybe it’s what artists in New York later thought about how Los Angeles was developing a little bit of an art crush in a surfer town that would never be taken seriously.

Maybe the reality is the one I always tend to believe in: art and artists happen pretty much everywhere. Good art and artists can be found within that everywhere. It shouldn’t be a new idea that we can find all kinds of amazing artists living and working in obscure places. It’s not about the name of the city and its reputation. It’s about the work you do. So, when someone asks “There are artists in Phoenix?” you don’t have to answer them. You can just show them.