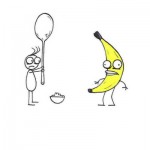 Sometimes our egos can get too big and need to be lanced, like a boil. I’ve found that the fastest way to make my ego shrivel up is to look at just how old certain artistic giants were when they made their marks on the world.

Orson Welles directed, co-wrote and starred in “Citizen Kane” when he was just 25. Arthur Rimbaud stopped writing poetry at 19, after producing brilliant poem after poem in his teens. And animator Don Hertzfeldt won the 2010 San Francisco International Film Festival’s “Persistence of Vision” Lifetime Achievement Award when he was just 33 years old.

That’s a lifetime achievement award at 33. Don’t be alarmed if you’re feeling a strange tingling sensation, ladies & gentlemen: that’s just your egos diminishing. I know mine is.

If you’re wondering just how good a filmmaker has to be to win such acclaim at such a young age, you’ll have a chance to see Hertzfeldt’s award-winning work for yourself when No Festival Required screens Hertzfeld’s animated trilogy “It’s Such A Beautiful Day” this Saturday at the Phoenix Center for the Arts.

No Festival Required’s Steve Weiss wanted to bring Hertzfeldt’s animations to the Valley after seeing some of Hertzfeldt’s work in one of the touring “The Animation Show” festivals (that Hertzfeldt put together with “Beavis & Butthead/Office Space” creator Mike Judge). Weiss told me that he’s been trying to do a Hertzfelt program for the last 8 years, and that Saturday’s screening of “It’s Such A Beautiful Day” (which includes a bonus short film by Hertzfeldt) is the first time that this work will be screened in Phoenix.

And it may also be the last: the prolific film-maker self-distributes his work and is very meticulous about their presentation (bootlegs of his work are all over the Internet, much to Hertzfeldt’s chagrin, who laments their poor film quality). He’s also known for his stance on licensing: Hertzfeldt refuses to do commercials (which hasn’t stopped many advertisers from biting his style, the worst offenders being Pop Tarts).

His style of animation is deceptively simple, using pen and paper stick figures (photographed on a Richardson 35mm animation camera stand, one of the last of its kind) and imbuing them with tremendous pathos and soul. He is so good at doing so much with so little that it’s going to be hard to think of stick figures and NOT think of him, much in the same way one can associate sunflowers with Van Gogh and Sweden with ABBA. It’s like his stick figures are the Platonic ideal that all stick figures throughout human history have been aspiring to be… and always falling a little bit short.

“Everything Will Be OK” is funny, disconcerting, strange and beautiful. It’s the kind of film that can make a person feel like they’re tripping on drugs, or wish they weren’t. Watching it I could understand why a man in his 30’s deserved to win a lifetime achievement award; and if he continues to produce this kind of work in the future, I hope he wins dozens more of them. I just don’t want to hear about those awards: the last thing my poor ego needs is another lancing.

“It’s Such A Beautiful Day” screens Saturday, November 24, at 8 p.m. Tickets are $7 at the door and are also available online.

In this story: Don Hertzfeldt, It's Such a Beautiful Day, No Festival Required, Phoenix Center for the Arts