Your Downtown Beer | The RareAffair 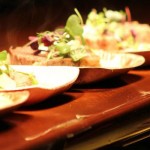 The RareAffair, one of the best beer experiences in the country, will mark its third year on Saturday November 10 at the Arizona Science Center. Every year I have a difficult time writing about it. I look forward to going to it and then I remember that in a better world, this would be the last year for the RareAffair. We’re lucky to have it. We’re unlucky that it even exists at all. One of the best beer events in the country needs to go away–but only for the right reasons. The goal, after all, is to stop brain cancer. The man behind the RareAffair is Louis Dolgoff. Dolgoff started the Beer for Brains Foundation when his wife Laurie was diagnosed with brain cancer. Some of you may have tasted your first craft beer because of “Dogfish Lou”. As the first Dogfish Head Brewery Rep in Arizona, Lou chose Carly’s as a downtown base of operations. Taps of Dogfish 60 and 90 Minute IPA were mainstays there for many years.

Today, Lou serves as the representative for Redstone Meadery based out of Boulder Colorado, but he’s made downtown Phoenix his home. You might recognize this lanky fedora’d figure bombing around Evans Churchill or grabbing drinks at Angels Trumpet. Maybe you’ve attended some of the smaller events that he’s put on in the Valley to support and promote the RareAffair.

The RareAffair is not the largest festival in the country. It’s not even very big when compared to other beer events in the state. It’s intimate. The format is structured for good times, music and conversation. Other festivals like the Great American Beer Fest revelry (GABF) have more varieties of beer. This festival has the right beer. It’s a curated festival meaning that the beers are hand selected by Chuck Noll, a Certified Ciccerone who also serves as Master of Fine Beer for World Class Beverages. Many of the beers selected by Noll are beers are not sold in Arizona.

There’s a rumor afoot that Indiana’s Three Floyds is on a short list of likely “surprise appearances.” Some beers are brewed specifically for this event. The Sonoran RAREaffair Ale is a porter made with Rhubarb. Papago’s Wild Raven ia a wild yeast double black barrel aged IPA. According to the brewer, Ron Kloth, it’s a collaboration done with Odell Brewing. It’s been served just once and at the time Kloth characterized it as, “a true beer geek beer with great oak, smokey phenols and a touch of sourness.”

Still other offering are unearthed from cool cellars to be opened after a years of conditioning. Alaskan Smoked Porter from 2004 fits that bill. This smoked beer loses its smoke when cellared but gains the dark fruit flavors of a Belgian Strong Dark. When it comes to beer, Noll puts the Rare in RareAffair.

This event is not just about beer. There is food from a dozen restaurants, cigars, spirits and wines. There is special pricing for designated drivers and something called a Sky Bike. If the last two years have taught me anything about the event, it’s to expect the unexpected. There are certain to be line-up changes. There will be surprises. There will be fun.

You will learn about Lou and Laurie. You’ll see why we should appreciate the RareAffair. This should be the last year. Right?

The Beer for Brains Foundation is a non-profit organization that raises money for the Barrow Neurological Institute at St. Joseph’s Hospital and Medical Center in Phoenix.