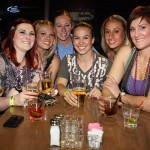 Over a dozen Downtown Phoenix bars and restaurants will be serving up specially priced snacks and spirits during the Sixth Annual Downtown Phoenix Pub Crawl, which returns on Saturday, October 13, from 9 p.m. to 3 a.m.

The best part about the Downtown Phoenix Pub Crawl is that you really don’t have to crawl anywhere. Wear those really uncomfortable boots you’ve been saving for cooler weather because we have a fleet of trolleys waiting to take you from pub to pub, first-class and proper like.

Over 1,000 Crawlers will participate in this year’s fall classic, many traveling in large teams led by Downtown Phoenix Ambassadors.

Trolleys will loop through the Pub Crawl route from 9 p.m. to 2 a.m., giving Crawlers safe passage to as many bars as they want, from core favorites like Copper Blues, Majerle’s, Lucky Strike and Seamus McCaffrey’s to Roosevelt District haunts like Bliss, Carly’s, Turf and Pub Crawl newcomer Film Bar.

Members of the Downtown Phoenix Twitter, Facebook and Weekly Insider e-mail communities will receive clues on how they can win more than 100 free tickets that will be given away the week leading up to the Crawl. Also during the week of October 8 there will be daily ticket giveaways at the Pop-Up Park from 11 a.m. to 1 p.m. The Pop-Up Park takes place on the CityScape plaza at Central Avenue and Washington Monday through Friday and at the Arizona Center on Thursday.

For those who don’t win tickets, they are $12 online at downtownphoenix.com/pubcrawl or $15 the day of the event. All Pub Crawlers must be 21 years old to participate. Tickets purchased in advance must be picked up at check-in between 10 a.m. and 10 p.m. October 13 at 101 N. First Avenue, Phoenix, AZ 85003.

Did you Crawl too much? Discount Cab Company will shuttle wobbly Crawlers home and give them a free ride back to their vehicles the day after if you call (602) 200-2000.
For discounted Pub Crawl tickets visit downtownphoenix.com/pubcrawl.