The Green, Green Grass of Ro2 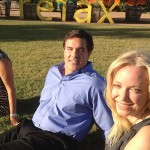 Have you stopped by The Lot: What Should Go Here? project at the Ro2 pop-up park and public art space (corner of Roosevelt and 2nd Streets) recently and noticed the lush green grass in the formerly barren lot? There’s an amazing story behind the long-term health of that grass, which involves science, community development and serendipity.

After unsuccessfully trying to keep the grass in the Ro2 pop-up park alive, park innovator and sustainability advocate Dorina Bustamante (thanks to a genius grant from the property’s owner and architect, Mike Davis, to temporarily activate his vacant lot) turned to Avelis Biotech to see if they could help. Avelis has offices in Chicago and at SkySong in Scottsdale, where they’ve been developing some remarkable cell enhancement technologies that are having significant results in a variety of areas, including soil remediation, coastal remediation, and water clarification, among others. AvGro CROP/TURF helps grass reach its full potential, even in the Phoenix desert.

Avelis saw the Ro2 pop-up park as a way to publicly showcase the remarkable effectiveness of their soil amendment technology, AvGro CROP/TURF.  AvGro works like nothing you’ve ever seen before. It is a simple organic product that creates a complex soil food web by coordinating the natural production of the three major plant nutrients: nitrogen, phosphorus, and potassium within the soil biomass. The production of these nutrients supports vegetation and it is absolutely safe.

If AvGro is used, there is no need for chemical fertilizer, herbicides or pesticides. Dr. Justin Cannock, the President and Chief Science Officer of Avelis describes AvGro CROP/TURF as “a complex suite of element and mineral structures that work to address certain requirements in the field.” In plain English that means it makes soil more fertile in an arid environment. In the case of the Ro2 pop-up park, there were two main “requirements in the field” that made keeping the grass healthy a difficult challenge: the reliance on irrigation, which leads to a build up of salts; and the low amount of organic matter in the granite substrate.

Initial efforts to get the sod to take root and thrive failed. “When we laid down the sod in early June, we tried to recreate how most people would approach this project, including how a typical landscape company would do it, using typical products,” said Bustamante. “It started off great and green and promising and then it crashed! Having met Avelis earlier in the year, I realized that we needed to take a different approach, using a sustainable technology that was available through this research and development company right here in the valley.” Avelis felt confident that this simple organic product could have terrific results on the Ro2 park because it is non-soluble to water; it actually works down into roots, rather than washing away, creating as supportive an environment as possible. Given that the turf in the park needs to put down roots in granite, AvGro CROP/TURF helps create an organic sweet spot in the soil that is very accommodating to vegetation. As described by Monica Brandt, Chief Operating Officer of Avelis, “It’s a land stewardship play.”

New sod was laid down in the Ro2 park and AvGro was spread as a simple top dressing. No one was sure how many applications might be needed because of the granite substrate and because they weren’t sure how long the temporary park would be active.

In just two days there was a noticeable improvement in the appearance of the turf grass. After six weeks it became clear that the park might be around for a full year, so Avelis did a second small application. The grass is continuing to take root and thrive. And as Dr. Cannock pointed out, if you visit the park and take a careful look, “it’s difficult, nay impossible, to find weeds.” TRY and find a weed.

The Avelis collaboration with the Ro2 park is the first application of AvGro CROP/TURF in the Phoenix area, however, they have done both soil amendment and soil remediation in New Mexico using both AvGro CROP/TURF and AvGro MEND and have photos of the impressive results on their website.

The most important thing Avelis wants people to realize when they see the success of the Ro2 park grass is that there is an alternative to the use of harsh chemicals. “You don’t have to give up anything in the process of using this organic product. It’s a terrific option for people who don’t want to use chemicals,” said Dr. Justin Cannock. “It is actually a soil builder and is highly recommended for vegetable gardens. Also it will help in the nutritional density of your harvest.”

So, the next time you find yourself passing the Ro2 pop-up park, stop for a moment and really look at the grass. It’s a spectacular example of what cell enhancement technology can achieve. If you’re itching to get your hands on some AvGro CROP/TURF for your own use, call Avelis Biotech at 480-884-1732.