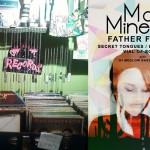 It’s hard to go out to a show without any expectations. To put it simply: if I go out and expect to see an awesome show, it usually ends up NOT being an awesome show.

So when I headed out last night I tried to leave my expectations at home… but of course, a few of the tricky devils played stowaway and tagged along for the night. I expected the touring acts to be more enjoyable than the local acts. Figuring it was going to be a night of weirdo-electronic music, I didn’t expect to dance, so I wore flip-flops instead of my groovin’ shoes. I expected a night of music aimed at the head, not at the rest of the body. All of those expectations were thwarted last night at The Trunk Space on Grand Ave. The Trunk Space offers an eclectic mix and merchandise and music.

I walked in as Secret Tongues were starting their set. There was already a decent-sized crowd in the space: at least 20 bodies. That may not seem like much, but 20 folks showing up to an experimental music show in Phoenix on a SUNDAY is impressive (hell, add 10 more to that number and it’d be a pop-open-the-champange occasion). The Secret Tongues duo were crouched on the floor, facing each other like they were about to play a game of jacks; in between them was a messy tangle of musical gear, effects pedals and black wires. At first their set was droning noise, a crackling electronic thrum. Halfway through the set, a pleasant surprise emerged from the noise: a beat. A steady pounding beat, a little off-kilter, like a stressed heart thumping frantically after a sprint, but a beat. The beat maintained throughout most of their set, not building towards a climax but just moving forward: an ECG flat-line, with no rhythmic spikes. The set wrapped up as the beat faded away, Secret Tongues’ Mitchell Keaney and Christian Filardo conjuring noise that sounded like they had recorded the sound of a wave crashing against a cliff, and were now playing it back very slowly.

After their set ended, I killed time by hanging around inside the Trunk Space. I’ve been going to and volunteering at the Trunk Space for years: to see shows, to be in shows, and to help run the shows. I was there that night in a “civilian” capacity: instead of running the door or making espressos, I was free to just wander. And the Trunk Space is a great place to kill time in: for such a small space, they cram a lot of stuff inside it. There’s the coffee bar, which also sells Italian sodas, teas and an array of root beers and other specialty sodas. There’s the boxes and boxes of cheap records and comic books. The merch shelves full of CDs and records, zines and comic books (my personal favorite is the hilariously homoerotic “Henry & Glenn Forever”), South Korean toothbrush holders, finger puppets and all sorts of other arts & crafty things made by local folks. The walls are covered in show posters, a gumball machine stands in one corner next to a B&W photo booth and the bathroom door is currently pin-cushioned with photos of adorable animals.

The second act, Vial of Sound (from Tempe), went on and immediately made me curse my flip-flops. They were… dancey! The two men onstage, surrounded by a claustrophobe’s nightmare array of vintage analog synthesizers, played a set of head-nodding, feet-twitching music. By the time they finished their set, Vial of Sound got added to my short list of local bands I really need to see again (and with the proper footwear).

The last of the local acts was another musical duo, Body of Light. I was expecting something harsh and dissonant: what I wasn’t expecting, to my pleasant surprise, was a pop band. Body of Light sounded like they’d be right at home in any goth nightclub’s playlist. They used synths, playing beats that wouldn’t have sounded out of place on a Suicide record. They were the closest thing that this night of music had to an outright pop band: some of their songs had an anthemic quality. And they were the first band of the night with vocals on every track. And he had an excellent, low, echoey voice: he sounded like he was singing along to Peter Murphy songs while trapped at the bottom of a well.

Closing out the night were the two touring acts. Around 11pm the headliner, Maria Minerva, started playing. Out of all the acts playing, she had the most minimal setup: all her synths and gear were set up on a card table. Minerva’s set was surprisingly short, playing only a handful of songs. But it worked: her set was captivating. On records her voice often sounds hemmed in by the production, like she was a ghost haunting her albums, but live her voice popped out, taking on a more human and expressive character. The music sounded skeletal, opening up lots of space for her voice to float around in. There were moments where Minerva’s voice sounded like she could be the little sister of Bjork, Zola Jesus or The Knife’s Karin Dreijer Andersson; albeit a little sister that had just downed a bottle of cough syrup. Her voice was languid, her lyrics sounded like they were crawling out of her mouth, her slow tempos were hypnotic. When at one point she quoted Faith Evans towards the end of one of her songs, and for a moment I thought I had hallucinated it.

It was a brief, excellent set, but it was also low energy. I was certainly not expecting to leave feeling happy but drained, eager only to find the nearest couch and pass out on top of it. I should have known that this night wouldn’t end without one last unfulfilled expectation.

In this story: Maria Minerva, The Trunk Space