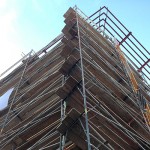 There were plenty of positive statements made at yesterday’s topping off ceremony for Roosevelt Point, at 455 N. 3rd Street. Let’s face it, when it comes to downtown there have been a lot of good things said in the past few years.

But no positive statement about downtown growth could outshine what stood as the backdrop to the celebration.

In the lot across from Bliss/ReBAR, the host venue, rises the seven-story structure that will soon be home to 600 new residents. The scale of it, and the projected impact, is downright impressive.

The development team of Roosevelt Point saw the opportunity presented by this formerly vacant lot, talked to the people they needed to talk to, and are on their way to forever changing this important gateway to downtown.

The project completion date is set for July 2013. Download the [download id=”15″ format=”1″], think about how to keep the momentum rolling, and read on to hear what those involved had to say. We’ve been meeting with the residential neighborhood, folks from the Evans Churchill Neighborhood as well as the Roosevelt Row Merchants Association and the Community Development Corporation, to really try to integrate what we’re doing with their vision for the community. Where our visions really align, what’s critical to make any community a lively place, is to get more people to live there. I think for the most part we’ve been able to accommodate a shared vision.

I think as more young people live here it becomes a more vibrant, exciting, happening place. First Fridays has been a really big success. We’re really thrilled to be at the heart of that. We’re at the epicenter of all that activity.

Even though our project is changing this neighborhood. I hope it doesn’t change it too much, because that’s really the lifeblood of what makes it unique. And I think that should attract people from all over the Valley to come and experience the restaurants, the galleries, the entertainment, the things going on downtown. – Steven R. Schnoor, Senior Vice President/Regional Director for Concord Eastridge There is going to be 600 more people here next year. It’s going to be amazing. The [Roosevelt Row Chile Pepper] festival this past weekend? There were about 2,000 people. How many more people will there be [next year]? We’re excited. – Kevin Rille, President of the Evans Churchill Neighborhood Association

This is a game-changer. It changes forever the view as you come into downtown on 3rd Street. Instead of seeing a bunch vacant land you’re seeing this beautiful seven-story building. It gives you a whole different mindset of what the downtown is, and can be. – Don Keuth, President of Phoenix Community Alliance

I think the Roosevelt Point project is going to meet a demand for more housing in downtown. With all the additional people moving downtown it’s going to create an additional demand for amenities. So people will need more options for shopping or boutique type stores, more restaurants, and services. With all the investment that has occurred over the past decade, a lot of people may say we’re done investing in downtown. I will tell you that we’re not done. There’s still a lot left to do – a lot of opportunities to invest and build downtown. – John Chan, Community and Economic Development Director for the City of Phoenix