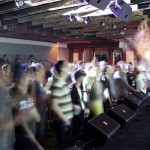 It’s hard not to look at downtown Phoenix as a graveyard for live music venues. You can walk around so many corners here and see a tombstone for one of the many places that sprouted up from its concrete soil over the last two decades. Paper Heart, the old Modified, The Ruby Room, The Phix, The Brickhouse, and many more like them, living on only in memories and in poorly composed social media photographs.

Every time one of those places gets put in the ground, the soothsayers of doom have a fit and start ranting up a storm: “Phoenix’s music scene can’t survive without a midsize music venue.” “Downtown is ovah.” “Cats and dogs will start living in sin!” Etc etc.

And then we cross our fingers and hope that something can come along and fill that void. Luckily for downtown, over the last year a major void-filler has put roots down on 2nd Ave. near Van Buren: the Crescent Ballroom. In its first year of existence, Crescent has done a lot of things right. They serve food late into the evening, and it’s pretty good. They have TWO bars, one inside the lounge and one in the concert area. They have a good sound system, a spacious concert area, bouncers who aren’t dicks (it’s so refreshing to not have to endure the Marquee Theatre TSA pat-down everytime I go), and rows of bleacher seating in the back for those folks who think sitting at a rock show is appropriate. And then there’s the patio, which is a perfect “hive of scum and villainy” for local hipster people-watching.

“We’re looking into expanding the patio,” said Charlie Levy, the man behind Crescent Ballroom. “And because of the success of our local music festival we did back in August, and how much people enjoyed it, we want to do more things in the back, outdoors”.

The Ballroom has been very busy, considering its doors have been open for just one year. They’ve hosted over 364 shows (57 of which were sell-outs). When I asked Levy if any of those shows stood out as being a personal favorite, he replied, “Your phone’s battery would die if I listed them all.”

To celebrate that long list of great shows, Levy and co. are putting on a free show tonight. Dry River Yacht Club, Bogan Via, Djentrification, Bears of Manitou, Bruce Heimbuck, Flamenco Por La Vida, and the Tony Martinez Band are on the line-up for the 7 p.m. bash (and drinks will be half off).

“I grew up listening to music in the crescent city, New Orleans,” Levy said when I asked him the origins of the ballroom’s name. “And the crescent was the symbol of the original Phoenicians.”

Who knows? Maybe in a few years, if the Crescent Ballroom keeps on hosting big shows and maintains its appeal as a place to see and be seen, Phoenix might become America’s other crescent city.