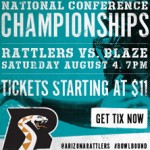 The Arizona Rattlers have secured home field advantage for the 2012 National Conference Championship. The Rattlers will face-off against the Utah Blaze on Saturday, August 4 at US Airways Center. Kick-off is scheduled for 7:00 p.m.

The 2012 National Conference Championship tickets are on-sale now and start at $11. Tickets are available at the US Airways Center box office or online at www.ticketmaster.com.

Every season ticket holder that renews for the 2013 season will receive TWO (2) complimentary lower bowl seats to the game. For more details on season ticket renewal please call (602) 514-TDTD (8383) or visit www.azrattlers.com.

Additional ticket promotions for the second round of playoffs include a ‘Buy One, Get One Free’ offer for military and first responders who present their service identification at the box office. This offer is available for up to TWO (2) complimentary tickets per service ID.

The Rattlers won the West Division Championship for the second consecutive season and ended their regular season 13-5, placing them as the second seed in the National Conference.

In this story: Arizona Rattlers, Downtown Phoenix, downtown phoenix events, from the wire