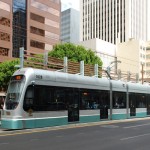 METRO received regional approval today from the Maricopa Association of Governments (MAG) on the route and transit mode for the Phoenix West extension.  Light rail will be extended 11 miles from downtown Phoenix, through the State Capitol area, to approximately 79th Avenue and the I-10 West freeway.  This is METRO’s first freeway corridor project, providing the growing West Valley with a higher-capacity and more efficient transit option by 2023.

“This project is an opportunity to extend the multi-modal Total Transit Network to the West Valley,” said Valley Metro CEO Steve Banta.  “It will help ease congestion on the busy Interstate 10 freeway and provide swift connectivity to jobs, schools, activity centers and entertainment options across the Valley.”

In 2007, METRO and the City of Phoenix initiated the Phoenix West Alternatives Analysis study to identify potential high capacity transit improvements for the West Valley.  Throughout the years, the project team has conducted significant technical analysis, partnered with the Arizona Department of Transportation (ADOT) and integrated public input to define the route and mode.

“Today’s approval is another critical step toward delivering a comprehensive transit system that our city and our region deserve,” Phoenix Mayor Greg Stanton said. “Light rail is key to our city’s new economic future; it creates jobs, further connects our community with sustainable transportation options and creates a multitude of new business development opportunities. We must continue that growth.”

Light rail as a fixed investment and the route design will provide opportunities for economic development and community revitalization.  Within the freeway, the route will move from the median to the north side at approximately 47th Avenue to help create additional development.

“The light rail extension will connect vital West Phoenix destinations like Desert Sky Mall, Ashley Furniture Pavilion, and other businesses to the rest of the Valley, creating a synergy that will help drive the area’s economy,” said Phoenix Councilman Michael Nowakowski who represents this district.  “It will also offer West Phoenix residents a cost-effective, sustainable transportation option and creates an economic bridge to our city’s westside.”

For more information on the Phoenix West extension, visit www.metrolightrail.org/phoenixwest.  To stay up-to-date with the project and be added to the email distribution list, contact Terry Gruver at 480-664-2631 or tgruver@metrolightrail.org.

METRO is responsible for the development and operation of the region’s high-capacity transit system.  The first 20-mile light rail line opened December 2008 and served 13.2 million riders in 2011, exceeding the prior year by four percent.  METRO serves an average of 45,000 riders per weekday.  It is also planning for six extensions that will create a 57-mile system by 2032.

In this story: Light Rail, METRO