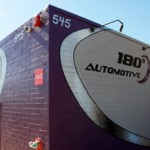 Grease-covered hands dive under car hoods, the banging and clanking of tools echoes throughout the garage and the smell of oil and gasoline permeates the air.

180 Degrees Automotive‘s new Pierson Place location has all the characteristics of a typical auto shop. But step inside the extensively renovated office and chat with owner Sarah “Bogi” Lateiner, and she’ll explain that it offers a lot more than car maintenance and repair services.

When she acquired the 7,800-square-foot space, which housed Chuck’s Speed and RV Center for several decades followed by Cornerstone Automotive for five years, it hadn’t been upgraded since the 1970s and was filled wall-to-wall with garbage, says Lateiner.

She teamed up with contractors from the coincidentally named 180 Degrees Inc design-build company who gutted the interior, scoured their warehouse for recycled materials and carried out Lateiner’s vision.

The contractors used shipping crates stamped with “180 Degrees” for table bases, granite from a household kitchen for tabletops, and wood doors from its warehouse stash for the auto shop’s art display, which currently features a series of photographs starring female mechanics.

For the countertop, however, Lateiner enlisted the help of local artist and friend Christine Cassano. The artist started with slab of concrete and embedded it with a valve body transmission, several automotive gears, metal washers, aluminum rods and dark purple glass pieces. She then used a water-based concrete stain and graphite pencil on the surface.

Lateiner hopes to show the work of other local artists by rotating the displays on the art wall, adding to her already community-minded business model.

A slew of business cards dangle from the wall near the entrance and nearly all of them are local businesses whose owners or employees are customers. Lateiner says she often refers customers to them and vice versa.

“I love central Phoenix,” she says. “People are really involved with each other’s businesses and with supporting one another. There’s this whole group of young entrepreneurs who are saying, ‘This is our city and we’re gonna make it what we want.'” She is also passionate about educating the community, particularly the female population, about cars by helping them understand the work that is done to their vehicles and by offering car care classes.

“I got a great deal of strength and empowerment out of learning how to fix my own car long before I decided to become a mechanic, and after I did choose this as my career path, (I became) passionate about showing other women what they’re capable of,” she says.

Lateiner decided to learn how to fix her own car because she felt like she had a big target on her head when she entered auto shops. She took an auto shop class in high school and rebuilt her first car – a “piece of crap” Volkswagen Bug – from the ground up. She went off to college to study law but followed her heart back to the garage.

After finishing tech school and breaking into the industry, which wasn’t easy as a female, she eventually opened her own shop with the idea of creating a place where no car owner would feel insecure.

If You Go: Grand Opening Party

What: Celebrate the grand opening of 180 Degrees Automotive’s new location with a ribbon cutting ceremony, a community toast, food and give-a-ways.