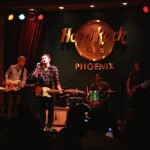 Local Phoenix band The Alchemy Heart recently participated in the Hard Rock Cafe’s Hard Rock Rising competition. This global battle-of-the-bands started with 18,000 groups from around the world — and The Alchemy Heart made it all the way to the top ten. Winners were determined each round by judges or by Facebook votes from fans, and the grand prize is a chance to perform in London with Bruce Springsteen and the E Street Band, among others.

DPJ music blogger Erin Bartynski sat down with three of the six members (Israel Whittermore, vocals/guitar, Brian Whitman, producer/keyboard/guitar, and Tim Rahman, drums) over a pistachio-and-onion (the “Rosa”) pizza at Pane Bianco, to talk about the up-and-coming band, the competition, and their take on the Phoenix music scene. About The Alchemy Heart

Brian Whitman: What is our bio? What does it say?

Israel Whittermore: (Laughing) Great you guys, we look real professional already. While pulling out his iPhone and searching the web, he explained he and band member Josh came up with it while writing music together over Skype. He was in Phoenix, and Josh was in Kansas for school. Then he read the bio out loud: “A few guys who dream of playing music that changes someone’s life, if only for a second. We want to create something that is hopefully honest, a little original and simply honey to the ears.”

The idea was, you’ve been in these moments, whether it’s music or whatever inspires you, where it feels like everything just comes together, If you’re watching an artist, it’s like, this is what they were made for. So that’s the idea behind the bio: we want to create those moments.

DPJ: How did the band get started?

Israel: We all, throughout the years, have played together in one way or another, whether it was in church functions or in other bands or just writing together. Josh and I have known each other a long time — he’s from here — and it kinda worked out where he left (for school in Kansas) and that’s when we decided to start doing stuff. He comes back for big performances.

Brian: I was initially just the producer, and then I started to play keys a little bit at the shows that Josh couldn’t make it to.

DPJ: How long has the band been together? Israel: We played a show in June last year together at this little dive bar, and it was good, we got a lot of positive feedback. Our first official show was at the Hard Rock here (in downtown Phoenix) on August 27th 2011. That was a big show,  we sold out the Hard Rock…

Tim: Yeah, Israel has a lot of friends.

Israel: …but because of the distance thing, we’ve only played five shows together since.

DPJ: So what should your fans know about you that isn’t in The Alchemy Heart’s bio?

Brian: I think the cool thing about The Alchemy Heart is…obviously it’s driven by Israel. He’s the primary song writer, but everyone who comes and plays in the band..we were already pretty much friends to begin with. So it wasn’t like trying to hire guys out, [but] more like asking your friends to play with you. Which is maybe why it’s so enjoyable.

Tim: I think the reason it works is because we all musically had the same background (playing church music), so we all approached music from the same vantage point, as far as what works and energy and all that kind of stuff. We all came in and put our on spin on it, but it all generally worked together just cause we kind of approached it similarly. We didn’t have any rough moments.

Israel: I’ve always felt like its easier to work with musicians if you can just trust them from the beginning, so for me, even though they’re songs that I’ve written, I’ve never felt worried. Like, Tim is an amazing drummer so I just know Tim’s gonna do it, he’s gonna feel it, he’s gonna hear it, and it’s the same way with Brian and it’s the same with Alex. I trust it’s gonna work. They’re all incredibly talented guys. I’ve always said the way you make yourself look good is to surround yourself with better people…

Israel: …and to be able to go, “I don’t know if that works,” or “Let’s try this instead,” and no one feels like you’re going to hurt someone’s feelings.

Tim: Everyone in the band is individually really talented. So everybody has nothing to prove.

Brian: We take it seriously but we also just like to play. And we’d like to play in London.

DPJ: Speaking of London, how did you guys initially hear about the competition?

Israel: We had played the Hard Rock before, so one of the managers had emailed me. Also, IAMWE, the band who took second place last year are also from here, and one of them had said it would be a great opportunity for us to maybe get some exposure.

DPJ: So once you made it past the live performance battle rounds at the Hard Rock Cafe with the judges, it was up to Facebook voters to put you in the top ten. How did you encourage people to vote for you?

Brian: (Laughing) We literally harassed people. The last couple of hours we literally called people on the phone walking them through with a laptop, having them log in to Facebook and vote.

Israel: After the first week it was not looking good, we were getting destroyed and were thousands of votes behind. But then we realized, the only thing standing between us and the guys who judge this final round is basically us. It really came down to how bad do we want it and what does it take to start getting votes. So we sent out like 22,000 emails, Facebook messages, tweets, all of the above.

Tim: The day when we really started coming back in the running, I remember getting some really frantic texts from Israel. He was losing his mind, saying “Oh my God guys, oh my God guys, it’s down to only a couple hundred, do what you have to, anything goes!”

Israel: I went to the hard rock at 5:30 p.m. and was literally standing on a table, and it was packed because of the diamondbacks game, and they gave me a microphone and I started explaining, this is the deal, this is how close we are, we could be one of ten bands in the world to have this opportunity. And that’s when we started calling everyone. My sister was even like, “I’ve had 10 people tell me to vote for your band. It’s my brother, of course I’ve voted for him!” In four days, we went from 52nd to 7th. We ended up in 8th place.

Brian: I just remember telling Israel when we got in the top ten, you know what, now, I don’t mind if we don’t win. Because it’s judged on musicianship and it’s not just internet votes, so if we don’t win it’s kind of because of who we are and that it wasn’t what they were looking for. We can almost lose with dignity now. Unfortunately, The Alchemy Heart did not win the trip and performance in London. However, you can catch them at the Sail Inn on Friday May 11 for their CD release party. Doors are at 8 p.m., and the boys from The Alchemy Heart will be joined by other local bands The Cold Desert, IAMWE, Dr. Bones, The Buxtons, and Future Loves Past.

The day after the announcement was made, Israel emailed us the band’s reaction: As far as the Hard Rock Calling competition goes, obviously we are bummed. However, from the beginning we always felt that we would give our best and have no regrets. It has been an incredible, crazy and sometimes anxious journey and we have learned a lot, we have connected and met some great people and more people have heard our music because of it. So we can’t complain. Now we our just looking towards the release party and then we will see what happens after that!

On Downtown Phoenix: Favorite Spots and the Local Music Scene

DPJ: What’s your favorite downtown Phoenix hangout, since you all live and work around downtown and central Phoenix?

Brian: I like Cibo, it’s probably my favorite restaurant to just go and enjoy a night.

Tim: Thai Basil – I was just there today, I had panang!

Israel: We hit up Seamus McCaffrey’s quite a bit. We like Irish and British pubs

Brian: If you ever wanna find The Alchemy heart, check Hazelwoods. Or Rose and McCaffery’s.

DPJ: What do you think about the scene in downtown Phoenix these days?

Brian: Phoenix the past year or so has really just exploded with people and viability, it’s not just First Fridays that people go out for anymore, there’s people out all the time now which is great.

Israel: The funny thing is, we’d go to Austin for a festival or Chicago for a festival and we’d look around and wonder, why doesn’t Phoenix have this culture? It’s not the people, people want it. Literally in the last couple years we’ve seen downtown and even Tempe change some, and it’s bringing out a lot of good musicians over the last year. I feel like I’ve seen this Phoenix music scene really kind of blossom, where all of a sudden it’s like, ‘woah those guys are local?’ So that’s been great.

In this story: Hard Rock Café, Listen Up PHX, the alchemy heart