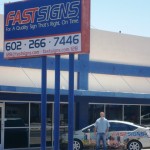 Scott Koehler, who has owned a local franchise of FASTSIGNS® for 10 ½ years, will be featured in the FASTSIGNS® episode of CBS’s hit series “Undercover Boss,” Friday, May 4th from 7:00-8:00pm.

On Friday, there will be an open house from 2:00pm-6:30pm with refreshments & door prizes at the FASTSIGNS® store located at 2517 N. Central Avenue in Phoenix. Then the “viewing” party will be across the street at The Fairfield Inn & Suites, 2520 N. Central Ave., to celebrate with refreshments and hors d’oeuvres, starting at 6pm. For more information call 602-266-7446.

Each week, the two-time Emmy Award-nominated  “Undercover Boss” follows a different executive as they leave the comfort of their corner office for an undercover mission to examine the inner workings of their companies. While working alongside their employees, they see the effects that their decisions have on others, where the problems lie within their organizations and get an up-close look at both the good and the bad while discovering the unsung heroes who make their companies run.

Catherine Monson, CEO of FASTSIGNS® received two important “signs” while on her undercover trip to the Valley. The first was on the job site with Scott. “I was impressed the moment we arrived seeing the magnitude of the project,” states Monson. “It was an impressive and difficult exterior install three stories up. Not a typical FASTSIGNS® project” “ It was exhilarating to work with Scott and I asked him how he knew how to do this type of install and his reply was that ‘he learned how to do it on his own’.” “I realized that corporate needed to provide this training and they will integrate it into the corporate franchise training program starting mid-summer of this year.” The second “sign” about how Scott was as a business owner dealing with business and life challenges. She learned his wife has multiple sclerosis and due to chemotherapy treatments is unable to conceive. They were turned down by the first adoption agency they went to. Then Scott was diagnosed with bladder cancer and had two surgeries. An introduction by a friend enabled them to adopt a newborn baby girl. His cancer returned and he made the decision to have his bladder removed. At the end of 2008 business was down 35-40% with light rail construction in front of his location and then the recession. He had to downsize, no vacations and put in extra hours, yet has persevered with a positive attitude.

“I know too many people in life that don’t have the challenges he has and they complain. Scott is positive and full of gratitude,” states Monson. “I collect positive quotes and Scott exudes inspiration.” “His outlook on life motivated me to create an award in his honor that will be given out at our annual corporate event.”

“I am a positive person. I see no point in being negative. Negative people tend to get negative results. Positive people at least have an opportunity for a positive result.” states Koehler. “I am blessed to be alive and I have a wonderful family. I enjoy my business and being a part of this show and the rewards I have received from Catherine and FASTSIGNS® International are incredible!”

To find out what rewards Scott received, you will have to watch the show on Friday, May 4th at 7pm. Come join us in the fun of the reveal!