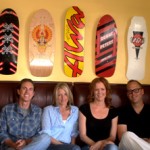 Upward Projects, a group of locally-focused restaurateurs headed by Craig & Kris DeMarco and Lauren & Wyatt Bailey, will open a brand new restaurant concept in the North Central* Phoenix neighborhood in the Fall/Winter of 2012.  The location, a historically relevant Al Beadle building located on the Southwest corner of Central Avenue and West Oregon Avenue (5210 N. Central Avenue, Phoenix, 85013), will encompass 3,000 square feet of space that originally housed the iconic First Federal Savings & Loan Bank.  Architecture and design will be a joint effort executed by Shepley Bulfinch and Upward Projects, with a priority placed on preserving the original architecture and keeping the structural integrity in-tact. As the plans are being drawn up and the idea boards are pinned with ideas, Upward Projects is working hard to preserve the legacy of the architect that helped create the magic.  “The coolest part of this process has been meeting Nancy Beadle, Al’s wife.  We feel immense pressure to show each project the justice it deserves, so sharing our vision with her has been unbelievably important to us,” Kris DeMarco says.

The team has been traveling extensively, gathering ideas and inspirations from dynamic communities around the world.  “North Central Phoenix is one of the most vibrant, neighborhood-centric pockets around, and it’s still accessible to nearly everyone.  Since we opened Postino Central in 2009, and subsequently Windsor & Churn in 2011, we’ve had a chance to connect with the people that live, work and play in the area and they are electrifying.  The North Central neighbors have provided immense support over the years, and we are committed to this community,” says Lauren Bailey.

Upward Projects also worked in conjunction with Local First Arizona to put the project through the Adaptive Reuse Process, a City of Phoenix-sanctioned policy that encourages density in the Phoenix area.  Through this process, a focus is placed on decreasing building permit fees for infill projects that are closer to the city center light rail and bicycle routes, with a goal of creating more creative spaces for independent businesses to thrive in the heart of historic Phoenix.

When the project opens in the latter part of 2012, 50-60 additional jobs will be created along with the rebirth of an iconic building that will serve the residents that surround.  For more information on Upward Projects, visit www.upwardprojects.com

*Some refer to this area as Uptown.

In this story: Al Beadle, from the wire, Postino Central, Upward Projects, Windsor and Churn