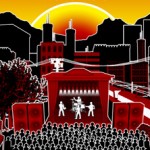 Downtown Phoenix will be the new location for this year’s 21st Annual Blues Blast, hosted by the Phoenix Blues Society. Until this year, the event, which began in 1992, has been held in Mesa.

Downtown Phoenix is growing and the Phoenix Blues Society felt a change was needed.

“The Mesa Amphitheater was a great venue, but Phoenix offers several advantages. It is centrally located and there’s a light rail stop [nearby]. Phoenix is undergoing revitalization that we are excited to be a part of,” says Phoenix Blues Society Volunteer coordinator Dave Saunders.

A total of six bands will be playing at the blues blast event.

“Our headliner is Sugar Ray and the Bluetones (pictured below). Sugar Ray Norcia is one of the premier blues players and he’s played with some of the best in the business.” Saunders says. Veteran harmonica player, Rhythm Room owner and host of Those Low Down Blues on 91.5 KJZZ, Bob Corritore, will be playing in-between sets with his partner, Dave Riley.

Saunders believes this year’s blues blast will be a treat for blues fans.

“Blues Blast is just one part of our greater mission, which is to promote blues music. If you never have been to a blues show, come out. I guarantee you will be back for more!” Saunders says.