From the Wire | Weekend Brunch & Bloody Mary Bar at Windsor 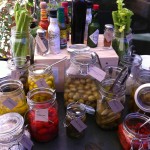 Who:       North Central neighbors, beach cruisers, weekend warriors and anyone looking to start their Saturday and Sunday mornings off right

What:      Rock bed-head with pride, throw on your shades and flip flops, and head over to Windsor for the brand new brunch menu beginning Sunday, February 19th, continuing every Saturday and Sunday thereafter from 9am – 1pm.  A first for the local hangout that opened the doors in its namesake historic Phoenix neighborhood in April, 2011, Windsor’s Brunch & Bloody Mary Bar provides a casual and familiar wake up call to those looking for the perfect way to start or end the weekend. “We first launched brunch at our sister restaurant Postino Central a few months ago and the neighborhood loved it, so we figured why not do it Windsor-style?” says Upward Projects co-owner Craig DeMarco who, with partners Lauren Bailey and Brent Karlicek also owns Postino Arcadia, Postino Central and Postino East (coming March 2012).

How do you define “Windsor-style”?  Guests will know once they grab a seat inside the vintage-inspired restaurant or on the cozy, climate controlled patio, and delve into a menu of morning favorites including Homemade Donut Holes served warm with vanilla mascarpone & Cotton Country strawberry jam ($6), Southern Style Sausage & Gravy with homemade cheddar biscuits topped with country white gravy, two eggs over easy & Schreiner’s sausage ($9.75), and Windsor Eggs Benedict served on MJ’s English muffins with your choice of smoked ham with hollandaise ($11), crab cakes & spinach with whole grain mustard hollandaise ($15) or house smoked salmon with red onions & mixed greens with hollandaise ($12).

Those headed back from an early morning gym session or run down the nearby bridle path might enjoy the lighter fare, such as Quinoa Oatmeal with steel cut oats & black quinoa topped with vanilla mascarpone, brown sugar, dried fruits & nuts ($7), Easy Rider Frittata with roasted zucchini, tomatoes, fennel, red onion, red pepper & spinach topped with Spanish goat cheese & herbs ($9.50), or the simple yet satisfying Just Baked Zucchini Bread ($3).  Be sure to save some room for the homemade ice cream and nostalgic candy offered at Windsor’s own next door ice cream parlor, Churn.

No morning would be complete without an outstanding beverage selection, and there is no skimping here, including fresh juices and espresso drinks, Windsor’s signature $5 Pitchas of Beer, and a creative selection of prohibition-style cocktails (all $5).  But the real standout is the Bloody Mary Bar ($5), where you start by selecting one of two types, the Traditional with tomatoes, roasted vegetables, Fresno chiles & fresh horseradish or the Verde with cucumbers, roasted poblano, cilantro & watercress, and then head over to the do-it-yourself cart where you can trick out your cocktail with a selection of spices, salts, pickles and garnishes.

Thinking about riding your bike?  Take note of the newly installed bike lanes up and down Central Ave. between Camelback and Bethany Home Road.  Upward Projects proposed the idea to city officials last year to help slow things down a bit for the pedestrian-friendly neighborhood.