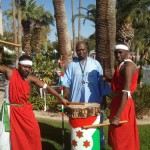 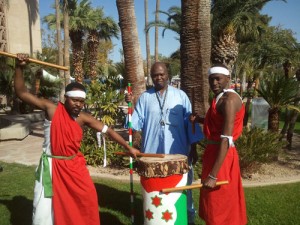 In 1993 when civil war broke out in Burundi (a landlocked country in east Africa bordered by Tanzania, Rwanda, and the Democratic Republic of the Congo) Pierre Gasaimbo fled to a refugee camp in Tanzania. He was 7 years old.

For the next 5 years he lived without knowing if he would ever return to his homeland. It was in this refugee camp in Tanzania that he began to play the Burundi drums, a sacred tradition that dates back to ancient times.

“The drum became my everything. My education. Everything. Drums don’t carry an ethnic group. We are united by the drums,” he said.

He never returned to Burundi. After 5 years in camp, he was resettled in the United States in Nashville where he lived until 2010 before he moved to Phoenix.

Today, he is the Director of Komezakaranga, a group of Inkomezakaranga (drummers) known as the tradition keepers. Like him, the others in the group are refugees now live in Phoenix, where they perform in schools, churches, and festivals. They’ve even performed for Mayor Stanton. Their high energy, enthusiastic performances channel history and ritual to preserve their culture and heritage as well as educate the younger generations and the larger community.

“Our theme is for us, for our community, for our heritage.”

On Sunday, with the copper dome of the Arizona Capitol behind them, Komezakaranga performed at the Arizona Best Fest as part of the Arizona Cultural Performance Showcase. Gasaimbo said they didn’t have enough time to perform the way they wanted.

In Burundi, the drummers would carry the drums on their heads and walk many miles to draw attention to the performance to come, almost like a pre-show. Komezakaranga wanted to do that at the Best Fest but were unable because of time constraints.

The Burundian ingoma (drum) is made from the trunk of a tree called imivugangoma, a name that means “trees that make drums speak.” The trunk is hollowed out, then covered with the skin of a cow, and held in place by wooden pegs. All the drums they perform with in Phoenix were brought over from Burundi.

When they preform, the drums are arranged in a half circle with one drummer in the center who leads the songs and the dance. When they begin, the drum sound “is like roaring thunder. You can’t ignore it.”

The drum is painted to resemble the Burundi flag. A white saltire (St. Andrew’s Cross) with a white circle in the center divides the flag into four areas of green and red. The green represents hope, the white symbolizes peace, and the red is the sacrifice of those who died in the struggle for independence. In the center circle three red, six-pointed stars are outlined in green. The stars stand for the three major ethnic groups in Burundi, as well as the national motto of  Unity, Work, Progress.

FROM BURUNDI TO PHOENIX

After 12 years in Nashville, Gasaimbo was encouraged to move to Phoenix to lead a group of drummers here. Currently there are 12 members. The youngest is 5 years old and plays a specially made small drum.

Gasaimbo said he is committed to establishing other drumming groups in all major cities in the United States for refugees and anyone else interested in learning about this tradition. “We want to offer significant activities to the community. More time with the drums means less time on the street,” where refugees struggling to find their place in a new country can be exposed to violence or drug use.

None of the drummers have returned to Burundi since they left and Gasaimbo said he wasn’t sure if any of them ever would due to financial and safety reasons.

By choice or circumstance they may not ever be able to return. But in Phoenix they at least have a part of their culture that connects them to their roots, while the rest of us have the pleasure of learning about and enjoying what they do. The young men of Komezakaranga are preserving the sacred tradition of drumming the same way their ancestors did, by training and educating the younger generations.

Check out the photos and video below and their Facebook page for information about upcoming shows.