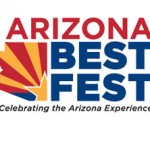 The “best of Arizona” celebration overtakes the Arizona State Capitol complex and its streets from 10th Avenue on the east to 17th Avenue on the west, traversing along Washington Street, aka “Centennial Way,” and rounding the bend from 17th Avenue onto Jefferson.

“It’s finally here and it is truly the perfect chance to Celebrate the Arizona Experience,” said Karen Churchard, executive director, Arizona Centennial Commission & 2012 Foundation, citing the title of the Centennial Countdown campaign that began in 2010, with planning even earlier.

“Since 2009, the Arizona Best Fest Series has been the brainchild of commissioners and staff to showcase Arizona’s finest.  The first Best Fest occurred in Prescott, which broke attendance records in that historic downtown district September 16-18, 2011.  Officially, more than 70,000 enthusiastic visitors were reported to have attended.  Unofficial reports slate it at about 80,000 throughout the weekend.”

Meanwhile, Mandi Wimmer, deputy director, Arizona Centennial Commission & 2012 Foundation said: “We are rounding the bend, are working hard and have every expectation that this will be a historically memorable and quite fabulous event.”

Wimmer, who is also coordinating another Signature Event, the Arizona Centennial Ride, added: “When the roar of 2,000 bikers arrives and all are greeted by Gov. Brewer along with thousands of attendees on Saturday afternoon, we anticipate one of those magical moments. We are really psyched to see it all come together.”

PARKING Guests are encouraged to take the Light Rail and connect with city buses to the east main entrance of Arizona Best Fest Phoenix, at 10th Avenue and Washington. Additional buses are planned from the Light Rail station to the east entrance.

ARIZONA CENTENNIAL RIDE & COPPER CHOPPER DRAWING  This Signature Event of the Arizona Centennial Commission on Sat. Feb. 11, 2pm, sponsored by Law Tigers, is a historical motorcycle tour, already pre-registered with 750 enthusiasts and begins at Mesa Riverview where participants are expected to gather for registration 11am – 2pm.  Participants are urged to register in advance at www.AZ100Years.org to guarantee commemorative items.

The Ride to the Arizona State Capitol rolls out at 2pm, led by Phoenix native and “Ride” Honorary Chairman Dierks Bentley, along with official mascot of the Arizona Centennial, the Copper Chopper which will ceremonially complete its 18-month tour to every corner of the state raising high levels of awareness and enthusiasm during the Countdown of the Arizona Centennial, and will be driven by its renowned designer and Arizona resident Paul Yaffe.

The Arizona Copper Chopper will be given away in a final drawing Sun., Feb. 12, 4:30pm.  To enter the February monthlydrawing (the winner of which will be entered into Sunday’s final drawing), tickets are available online at www.AZ100Years.org through 11:59pm on Thurs., Feb. 9. To enter the bonus drawing at Arizona Best Fest, one must enter at the Arizona Copper Chopper display on Sat. Feb. 11 from noon until 8pm.

Gov. Janice K. Brewer will greet the top 48 riders in the Arizona Centennial Ride (48 being significant because Arizona is the 48th state admitted to the Union) at 17th Avenue in front of the Capitol itself, welcoming Bentley, and providing official closure to the Arizona Centennial Copper Chopper Tour, which she christened for its maiden statewide outing in October 2010 at the Arizona State Fair.  The majority of riders will park their choppers along Jefferson, resulting in massive rows of diverse and colorful motorcycles for Best Fest visitors to review and admire as well.

SURROUNDING SITES  As Arizona’s Capitol complex becomes the destination for Arizona Centennial weekend, two stops are a must in the surrounding neighborhood:

Pioneer & Military Memorial Park Cemetery.  This historic site is open during Best Fest, at 14th Ave. and Jefferson.  See the graves of such pioneers as Jacob Waltz of the famed Lost Dutchman mine, Darell “Lord” Duppa, credited with naming the villages of Phoenix and Tempe, Tom Graham, the last man killed in Arizona’s Pleasant Valley War, the first and many of the earliest Maricopa County Sheriffs, and many more of our pioneers.  Also tour Smurthwaite House Museum built in 1897 and home to memorabilia and antiques of local Arizona Territory pioneer families. FREE.

Arizona Capitol Museum & Museum Store. Open Arizona Best Fest weekend Sat. & Sun., Feb. 11& 12, noon – 3pm, and on 100th Statehood Day, 9am-4pm. Listed on the National Register of Historic Places, construction began in 1899 when Arizona was still a territory to serve as the capitol building.  It was dedicated in 1901, 11 years before statehood. Today the building serves as the Arizona Capitol Museum and continues as part of a multi-site capitol complex.  The stunning USS Arizona silver service is on display; all four floors will be open to the public, including the 3rd floor House Chamber of the museum which was the site of the 1910 Arizona Constitutional Convention.  Walk the halls of those who framed the state’s constitution.

The Arizona Centennial 2012 Foundation is dedicated to education and commemoration of Arizona’s 100 Years through the production of time-honored Signature Events and Projects that provide the opportunity to observe Arizona’s 100 Years of Statehood and learn about our state’s past, present and future.