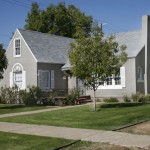 Located just off the light rail tracks, nestled beneath Midtown’s skyscrapers and surrounded by the bustle of the city is a neighborhood where the residents know each other’s names and still get together for holiday block parties.

The Willo neighborhood is Phoenix’s largest historic district, made up of more than 900 houses built from the 1920s through the 1940s in various styles such as Tudor, Spanish Revival, Bungalow and Ranch.

About 24 years ago, a group of residents decided to showcase their unique homes to the public. They created the Willo Home Tour, which has become an annual event featuring about a dozen historic homes. It attracts around 3,000 people each year and has had visitors from places outside of the Valley such as Tucson and California, says Andrea Katsenes, Volunteer Publicity Committee Chair and seven-year Willo resident.

The funds raised by the tour help support some of the neighborhood’s programs and events, and also contribute to its maintenance efforts. By using the tour’s proceeds to install speed bumps and tend to parks, the Willo district helps save money for the city of Phoenix.

The self-guided tour, which is run by residents on a volunteer basis, is also about bringing the neighborhood together and sharing it with the community, Katsenes says.

“We feel like we own a kind of treasure in Phoenix, a little bit of history,” she says.

This year’s tour will include homes that have not been showcased the previous 23 years. To keep the line-up fresh, residents may only display their home once every few years unless they have made significant changes to it.

The only building that is featured every year is the district’s historic fire station, and it is also the only non-residential building included on the tour.

Katsenes says the longstanding traditions and signature projects such as the home tour are part of what make Willo unique.

“It’s just a real neighborhood feel that you don’t get in a lot of neighborhoods anymore,” she says. “We’re a very close group.”

The tour also includes a street fair each year with live music and local vendors selling food, jewelry, antiques, arts and crafts, and other items.

Where: Willo Historic District, which is between Thomas and McDowell roads and First and Seventh avenues

Tickets: Can be purchased online for $15 or at Walton Park at Third Avenue and Holly Street the day of the event for $18