Your Downtown Beer | A Tropical Stout from Dublin 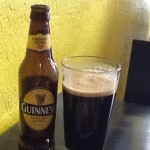 When you think of having a Guinness Stout in Downtown Phoenix, you probably imagine yourself seated in Seamus McCaffrey’s bar where the warm and homey pub atmosphere takes you at least as far as Boston, if not Shannon. You might be forgiven if you picture yourself on the Turf Accountant’s west facing patio bidding Sláinte to the warm winter sun. But from now until that day in March when many of us temporarily change our nationality to Éire, I like you to think about stout in a new way, one owing to the humid tropics as much as the cool fog covered Cliffs of Moher.

I’m asking that you consider stout as a Jamaican would and have a Guinness Foreign Extra Stout at The Breadfruit.

Available in the US since the Fall of 2010, Guinness Foreign Extra Stout traces its roots back to 1801 when it was known as a West Indies Porter. According to Guinness, the beer was designed heartier for shipping abroad. Export beers are often more aggressively hopped and contain more alcohol than their domestic counterparts under the presumption that this will improve stability during shipping.

This is not your father’s dry Irish stout, unless of course, you have lineage in the Caribbean, Africa or Asia. The Guinness that most of us are familiar with is Guinness Draft, sold on tap and dispensed under a higher pressure nitrogen/CO2 blend or in bottles and cans containing a nitrogen “widget.” It’s roasty and coffee-like, with a creamy sensation aided by the cascading pour associated with the heavier body and nitrogen’s inability to stay in solution. Guinness Draft finishes dry with a characteristic acidic sourness.

In the 1960’s, Guinness began shipping concentrated extract to breweries around the world to be blended with locally brewed beer using local ingredients like sorghum. Guinness brewed in warmer climes may have been fermented slightly warmer and fermented less completely than its Dublin brother. Warm and under-attenuated fermentation often results in fruity aromas and flavors with a finish that is more sweet than dry.

As a result, today’s Foreign Extra Stout differs in many ways than Guinness Draft. Foreign Extra is stronger in alcohol (7.5% vs 4.2% ABV). It’s much roastier and can have bitterness that rivals an IPA–but those flavors are often balanced with a fruity esters and a sweeter finish. If you subscribe to the analogy that Guinness Draft is a coffee milkshake, then a Foreign Extra is a Kahlua and piloncillo infused Mexican Coffee. Rum Bar at The Breadfruit

It’s a beer of cultural fusion that fits right in with the European, African, Chinese and East Indian influenced Jamaican fare at the Breadfruit. The beer’s roast and bitterness balances out the spices, while the stout’s unexpected fruitiness plays off mango chutney, pineapple, rum and lime.

There are no locally brewed versions of Foreign Extra Stout and none of the usual out-of-state craft breweries currently brew this style. Carly’s Bistro used to carry Lion Stout from Sri Lanka, but the distributor is no longer selling it in Arizona. Perhaps Carly’s will go back to the Coopers Best Extra Stout they had on their shelf years ago. For now, let The Breadfruit be your downtown Guinness.