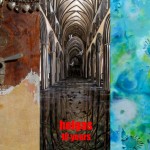 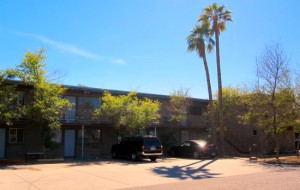 Holgas began life as a modest, two-story apartment building sometime back in the 60s and through the years suffered the usual slings and arrows of urban decay and neglect. Wayne Rainey, an urban pioneer looking to pump some life back into Downtown, bought the rundown complex in 1999 and, in an affordable housing deal with the city, brought it back to life as live/work/exhibit space for a steady stream of young artists throughout the last decade.

As Rainey recalls, “Holgas, (along with other early outposts like Rainey’s monOrchid Gallery, Kimber Lanning’s Modified Arts and Greg Esser/Cindy Dach’s eye lounge) was part of a conscious effort to build a critical mass of artists and art spaces to help bring people back to Downtown Phoenix.”

Over the years, Holgas has suffered some highs and lows, and recently Rainey decided to sell. Phoenix-based installation artist and fourth generation Phoenix farmer Matt Moore spotted the “for sale” sign and decided to stop and check it out. And here’s where serendipity comes in. As he was walking up to the building, Gordon Knox (Director of the ASU Art Museum) and Greg Esser (Director, ASU Art Museum’s Desert Initiative and owner of several downtown art spaces) were walking out. Turns out, Moore and Knox knew each other from Moore’s time at the Civitella Raneri Foundation, an international artist residency in Perugia, Italy where Moore had been invited to stay a few years earlier. Knox, the one responsible for the creation of that residency (and a few others), was now at ASU.

“My seven weeks in this artist residency program in Perugia, Italy was an amazing experience. It was so important to me as an artist, particularly the social interaction with other artists from all over the world, that it had become my dream to cultivate that kind of environment for others,” says Moore.

Running into Knox and Esser that day set the wheels in motion for Moore and his painter wife, Carrie Marill. They’d been looking for studio space for themselves and Knox was looking for space to start a residency program for international artists in Phoenix. “Holgas had what we needed: room for our studios, spaces for other artists to come together, and a great location with proximity to coffee houses, restaurants and the creative mind of the area,” said Moore. Over coffee the partnership was born.

Moore, Marill and Moore’s parents together purchased the building and are spending the next few weeks spiffing things up a bit before the first international artists (coming from Italy, France and Mexico) begin arriving for their residencies on January 15.

“When artists become successful in Phoenix, they hit the proverbial glass ceiling and often they leave. We see developing this residency as a way to keep vested in Phoenix, to move forward on creating an even more creative environment in Phoenix,” said Moore.

Rainey is happy with the prospect of an international artist residency program coming to Holgas. “My one wish for the future is that Holgas continues to have a positive effect on the life of the city.”

To celebrate the spirit of Holgas and some of the artists who made it their home over the years, Rainey is hosting “Holgas – 10 Years Gone, A Retrospective” at monOrchid Gallery on Friday night, December 16.  Join the fun and celebrate the passing of the torch with an all-star show of Holga’s alumni.

Who: Artists showing include –