Talking Through the Transition 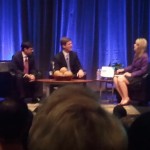 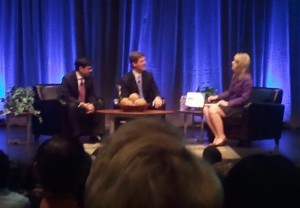 Mayor-elect Greg Stanton appeared with outgoing Mayor Phil Gordon to a packed house in a free public event last night at the Herberger Theater. The event, “Phoenix in Transition” was presented by Valley Leadership as part of their Community Dialogue series and moderated by 12 News reporter Melissa Blasius.

The event was an overview of the role and vision of Mayor-Elect Greg Stanton and insights and advice from outgoing mayor Phil Gordon who has served as mayor for the past eight years. Stanton was given the opportunity to articulate his ideas and vision for Phoenix and how he would put his campaign promises into action.

Mayor Gordon was greeted with a standing ovation when he came on stage to give his opening remarks. He spoke about important accomplishments in Phoenix since he was elected, highlighting the ASU Downtown Phoenix campus and METRO Light Rail as major components of downtown’s revitalization and the regions economic strengths.

Mayor-elect Stanton was also greeted with a standing ovation when he came on stage. He thanked the volunteers for his campaign and its successes before launching into his energetic and optimistic opening statement.

“We are not just in a leadership transition,” he said, noting that Phoenix is in a transition of growth still trying to figure out who and what it wants to be. Education will be a “relentless focus” so that Phoenix can compete in the international market.

Taking the Reigns
After opening statements, Stanton and Gordon joined Blasius on stage for an open conversation. Stanton said he believes Phoenix is a well-run institution but that there are ways to make it better.

When asked how he would be different from Gordon, Stanton said that he planned to serve on regional boards like MAG and Valley Metro. “We will sink or swim as a region,” he said.

Both men agreed that the mayor plays an important role not just in Phoenix but in the state. Stanton cited the biomedical campus as an example of how the mayor of Phoenix can be out in the public making the case for such projects that benefit Arizona as a whole. Stanton also recognized that a strong downtown core benefits the entire city and the state.

Ideas Into Action
After the conversation, Blasius spent time with Stanton one on one. She began with some lighthearted personal questions (his middle name is John; he’s left handed; drinks a lot of coffee; is in the middle of reading “Bird on Fire” and prefers to spend his free time with his children) before getting to the harder political questions posed by the audience and taken from Facebook. He answered questions about pension reform, how to keep the best and brightest in Phoenix, light rail extensions, and sustainability.

“Unless we get sustainability right, we can’t compete long term. We are a desert city and we have to do better. On my staff we will have a sustainability expert. Sustainability should permeate every decision,” he said. “We should be a leader in solar, but solar is just the beginning of the conversation.”

When asked how to bring more people downtown he answered that the people who live downtown should be included more in the decisions that affect them. “They have the best ideas,” he said. “They know what downtown needs to attract more people.” He also spoke candidly about rethinking the role and influence of the Phoenix Community Alliance and the Downtown Phoenix Partnership. “This isn’t a knock against anyone,” he said but “we need new blood in the downtown apparatus.” 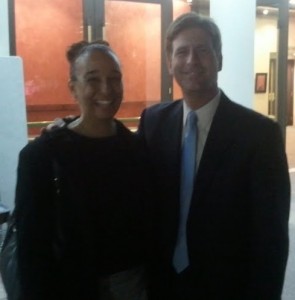 A Downtown Advocate
After the hour-long event, author and community activist Donna Reiner commented that Stanton is, “consistent, sincere, and understands the management of the city. He’s a different type of champion than Gordon.”

Susan Copeland, Chair of the Downtown Voices Coalition liked what he had to say about more community input regarding the needs of downtown as well as bringing in new leadership.

“We need to expand the power base. There are a lot of people who live and work downtown who have a lot of great ideas,” Copeland said.

Before leaving the Herberger Theater, Stanton mingled with the crowd in the front courtyard.

He told DPJ, “I’m not in rivalry with former mayors. I stand on their shoulders and want to build on what they’ve done. I’m going to be a relentless advocate for this community.”