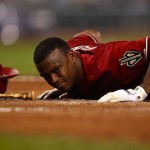 National League West wrapped up?
It’s a bit premature to declare the Diamondbacks champions of the NL West just yet. However, it would take a colossal collapse to allow the Giants to creep back into contention. The D-backs are fresh off a series win in San Francisco that built their division lead to seven games.

With only 22 games remaining in the regular season, the countdown to the division championship is very much under way. Even if the D-backs only played .500 ball for the remainder of the season, the Giants would have to finish with a 18-4 run just to pull even – a feat far-fetched for a team that has struggled since the All-Star break.

The two teams match up once more for a three-game weekend series at Chase Field. For the Giants to have any chance to overtake the D-backs, they would have to sweep that series. Saturday showcased an impressive matchup of aces when the D-backs and Ian Kennedy faced off against Tim Lincecum and the Giants. Ian Kennedy once again came out on top – further enhancing his already impressive Cy Young resume and pushing the division lead back to six games.

The rubber game on Sunday represented an opportunity to breathe life back into the Giants’ playoff hopes. Instead, the D-backs rallied late in the contest and cruised to a convincing series-clinching win.

The D-backs left town with a seven-game cushion as division leaders. With less than a month to go in the season, it’s encouraging that the D-backs are building their lead and do not appear content just trying to protect the lead.

The goal now should be continuing the aggressive play with hopes of wrapping up the NL West with at least a week or so remaining. Then the D-backs would have the luxury of setting their rotation for the playoffs and resting players. There’s also the possibility that the D-backs could be within a few games of improving their playoff position.

Make it hurt
One theme that drew a lot of attention throughout the week was the frequency that Justin Upton was hit by a pitch. J-Up is among the league leaders in the painful category.

The situation does bring up some interesting discussions. It’s hard for fans to sit back and watch the star player get abused over and over again, without the satisfaction of seeing some sort of retaliation. It’s unfair and unwise for Upton to charge the mound, taking matters into his own hands. He is the leader of this team, they can’t afford to live without him and his team is in the midst of a playoff chase. It’s really up to his teammates to have his back. Of course, there’s always the likelihood that a D-backs pitcher will plunk someone on the opposing team but again, the timing has to be right.

Especially likely in the National League when pitchers have to take the plate themselves. For now, the D-backs seem content using Ws as their retaliation method of choice. As much as it would be nice to see someone pay a price for throwing at J-Up, ultimately winning the division and playing with class is a higher priority.

Or they can just do what Miguel Montero did on Wednesday night. With J-Up grimacing at first base, Montero launched a three-run homer deep into the seats in right field. That’s the best way to make em pay.

In this story: D-backs Digest