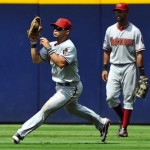 Best of times
Tuesday night was the high point of the season thus far for the Arizona Diamondbacks. Knowing they were facing one of their most difficult challenges of the season, the D-backs went into Philadelphia and beat Roy Halladay and the Phillies to start the road trip.

Beating one of the game’s elite pitchers in his home park was a tremendous accomplishment and went a long way towards legitimizing the Diamondbacks as a true contender. The win, coupled with a Giants loss, left the D-backs with a three and a half game lead atop the NL West – their largest of the season.

This marked the first time when Arizona had reached a level of national credibility. Unfortunately, the stay in the luxury suite may have only lasted one day. Even in the win, there were signs that the good times might not continue rolling. Of course, a win is a win and you take the runs any way you can get them, but in the 3-2 victory, newcomer Lyle Overbay accounted for all three of the D-backs runs. At the time the Diamondbacks were streaking and facing a Cy Young-caliber starter, so it’s easy to dismiss the lack of production and assume the bats would eventually heat up.

Worst of times
The D-backs dropped the final two games in Philadelphia and were swept in a three-game series over the weekend in Atlanta. The five-game losing streak matches a season high – or low – for the D-backs. Diamondbacks's bats were silenced by Atlanta

Though the losses and lack of production are discouraging, it’s not the end of the world. The D-backs just need to keep battling and finding ways to scrap out victories like they’ve done all season.

The D-backs are still clinging to a one and a half game lead in the division and the Giants are struggling and banged up. This week the Giants placed All-Star closer Brian Wilson on the DL in addition to highly publicized deadline acquisition Carlos Beltran and set-up man extraordinaire Sergio Romo.

While the D-backs still have work to do on the road, the Giants are returning home for some very winnable games. Clearly the D-backs need to get back to their winning ways in Washington if they want to return home in first place.

Someone please FedEx bats to Washington
The D-backs are on the road, but unfortunately it appears they left their bats in Arizona. In the six road games this week, the D-backs are averaging only a run and a half per game. That’s just not going to get the job done. The pitching staff would need to be perfect in order to pull out a victory. The loss on Sunday was an unfortunate example. Josh Collmenter allowed only one run over seven innings, but ended up taking the 1-0 loss because his teammates couldn’t salvage a single run in the ballgame.

The Washington Nationals shouldn’t be taken lightly, but they’re not on the same level as the Phillies and Braves. Hopefully the bat supply will be replenished in the nation’s capital and the D-backs can finish the road trip in impressive fashion.