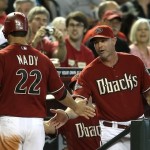 D-backs finish off winning homestand
The Diamondbacks’ 7-0 win on Sunday afternoon wrapped up a series win over the Colorado Rockies and gave the D-backs a 6-4 record for the homestand. Although winning six of ten is nice, the D-backs are currently not gaining any ground on the division-leading Giants. The D-backs will have a chance to take matters into their own hands when they face-off against the Giants at the end of the next road trip. The next ten days could make or break the season. California here we come
The D-backs have a day off Monday followed by nine games in as many days on a tour of California. The D-backs are currently four games back in the West behind division-leading Giants and really can’t afford to fall any further back. The road trip starts out Tuesday in San Diego with three games against the Padres, followed by a three-game weekend series in LA against the Dodgers. Then on to San Fran to battle the Giants for three to wrap up the trip. The D-backs need take advantage of their head-to-head match-ups with the Giants if they want to compete for the pennant.

Well deserved attaboy
By now most D-back and MLB fans across the country have heard the story about the selfless act that was played out on national TV during the Diamondbacks telecast Wednesday night on FOX Sports Arizona. Viewers could see a young man handing a souvenir foul ball to another young boy who was obviously distraught after missing out on the same souvenir because he felt like the ball had been intended for him.

Ian McMillan, of Scottsdale, gave the younger boy the ball because he said it seemed like the right thing to do. He hadn’t seen the younger boy when he caught the souvenir but quickly realized the situation and immediately reacted in a manner that’s captivated the sports world and beyond. There is an unwritten rule in baseball that says you should give a souvenir to a younger fan. In most cases that means adults passing on to children, but here it was a 12-year-old boy sharing with another child maybe a year or two his minor.

Meet the players
Later, during the broadcast, Ian was called up to the booth where he was awarded an autographed Justin Upton bat from announcers Daron Sutton and Mark Grace. The Diamondbacks organization stepped up to show their appreciation by inviting Ian onto the field Friday for batting practice and to throw out the ceremonial first pitch. Manager Kirk Gibson presented Ian with his own D-backs jersey and he was seen meeting the players and getting autographs.

Shiny, happy people
It was great to see a 12-year-old display a level of selflessness not often seen in today’s society – at any age. Also nice to see the local and national media recognize the good deed and reward Ian for his actions. Let’s hope that one day soon a selfless act like Ian’s can become the norm and not be viewed as quite so extraordinary. If that were the case our world would be a much better place to live.