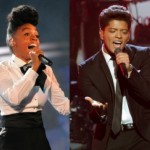 Two of the newest and youngest stars are hitting Comerica Theatre next Wednesday.

Bruno Mars and Janelle Monae are playing together for the “Hooligans in Wondaland” tour after playing side-by-side at the Grammys earlier this year.

Bruno Mars has those hits you’d love to hate like “Just the Way You Are” and “Grenade” that stay stuck in your head until the end of the day.

Although it seems like Mars came out of nowhere, he has been producing songs for artists such as Travie McCoy (yes that song you heard every time the radio came on “Billionaire”), Adam Levine and Brandy.

It wasn’t until two years ago that he was signed onto Atlantic Records and came out with Doo-Wops & Hooligans.

His producer roots brought his album up the charts and his single “Just the Way You Are” all over the airwaves.

His R&B partner on this tour has a staircase-type career building experience too.

After playing South by Southwest and winning a Grammy along with other awards, Monae started rising on music magazine’s radar and landed a spot on Bad Boy Records.

Her concept album The ArchAndriod (Suites I and II) came out last year surprising everyone with her alter-ego story coming to life in her songs accompanied by deep beats, soul and dance pop rhythms.

She announced that she plans on making videos and a comic book to accompany the album.

Be prepared to watch the tuxedo-wearing singer bring her afro-pop sound alive and thriving on stage.