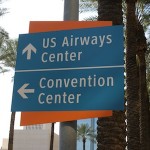 The Downtown Voices Coalition hosted its first Downtown Mayor’s Forum at the Lexington Hotel on Thursday night. Five mayoral candidates, Wes Gullett, Jennifer Wright, Greg Stanton, Peggy Neely and Claude Mattox took questions from the downtown community that focused on downtown issues and the needs and expectations of downtown residents. Attendees filled the conference room and spilled over into the bar where audio from the discussion was piped in. Arizona Republic reporter Richard Ruelas moderated the discussion.

Write-in candidate Thane Eichenauer did not participate in the discussion but was given two minutes to speak about his campaign. A second write-in candidate, Alex Malkoon, announced he was dropping out of the race.

The five participating candidates answered questions from the audience ranging from downtown housing issues, light rail, infill, historic preservation, and even where they take out-of-town visitors to show off the heart and soul of Phoenix. (Mrs. White’s and Lolo’s were mentioned.) 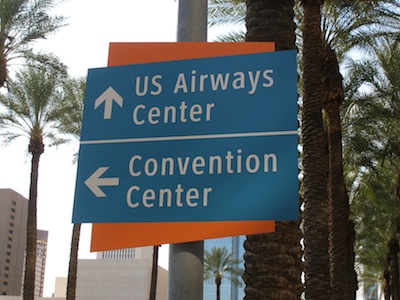 Getting Hot in Here
As would be expected the candidates had differing opinions about the role of government, the purpose and function of downtown, and city planning. The discussion heated up and became uncomfortable when Jennifer Wright goaded Councilman Claude Mattox into answering why he had not attended a budget meeting this week. He forcefully replied he had been at a funeral for a soldier from his district. After a few moments of tense back and forth between the two candidates, the discussion moved forward.

One particularly revealing question came when candidates were asked about their use of light rail. Wright said she had not once been on the light rail, Mattox, Gullet and Neely all said they had used the light rail in the past few months, while Stanton answered that he had taken the light rail to the debate.

Downtown Voices
All the candidates agreed that downtown needed more shade and lots of it if downtown was to become more pedestrian friendly and walkable. Words like “vibrant” and “24/7 community” were used but without much explanation as to how that is achieved other than the standard answers of “supporting small business” and “better schools.” Stanton said historic preservation “works miracles” and acknowledged downtown as a neighborhood that should be treated as such. Wright disagreed and said that historic preservation stifles community development. She was not able to cite any recent historic preservation or adaptive reuse project.

If you were not able to attend this event, don’t worry. The Phoenix Community Alliance and the Downtown Phoenix Journal will be hosting another debate Monday night from 5:00 to 7:00 pm at the College of Nursing. Click here for more info.