Equality Arizona, a civil rights organization that advocates for the LGBT community in Arizona, hosted a historic mayoral candidate forum Monday night at the Sheraton Phoenix Downtown Hotel. The meeting was the first time the candidates have appeared in public together during this election and marks the first time that candidates for mayor have participated in a forum focused on the issues important to the LGBT community in Phoenix. 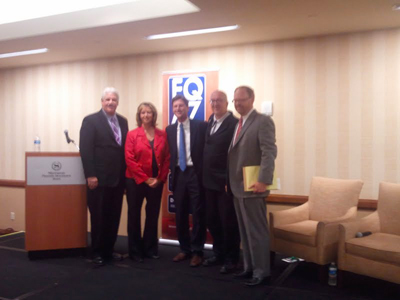 All the candidates running for mayor were invited to the forum, but only four participated: Thane Eichenauer who ran for state treasurer last year; Wes Gullett, a consultant of FirstStrategic Communications; City Councilman Claude Mattox; and former city councilman Greg Stanton.

About 250 people attended the event, which was moderated by CBS 5 news anchor Donna Rossi, who asked the candidates questions submitted in advance from the audience. Each mayoral candidate was given a minute to respond.

During the hour-long forum, questions focused primarily on the LGBT community regarding issues such as school bullying, marriage equality and employer nondiscrimination laws, but other topics like job creation, education, economic development, neighborhood development and the needs of small businesses were also discussed.

Four different visions of the role of government emerged during the discussion. For example, when asked if the candidates supported marriage equality, answers varied.

Eichenauer responded that government should not be involved in regulating any marriage; Gullet answered that the word “marriage” is a religious word but that he would support civil unions; Mattox said he also supported domestic partnerships; and Stanton answered succinctly, “I support equality.”

Stanton also stressed the importance of a diverse economy with higher-paying jobs, and said that Phoenix should focus more on creating those industries rather than just trying to attract them. “There is limitless talent in this community,” he said.

Mattox insisted that strong neighborhoods and schools were the backbone and future of the city. “They are our civic and social centers,” he said.

Phoenix voters will elect a new mayor on August 30 to replace Mayor Phil Gordon, who has termed out after eight years of service.