When cruising down 16th Street, it doesn’t take long to realize why the New Times voted it 2010’s “Best Street in Phoenix.” The abundance of shops, boutiques and eateries has not only brought life to the once overlooked street, but also revitalized the businesses that have waited patiently for their time to shine.

Boom Boom LaRue, Universal Furnishings and Offerings, Two Hippies Beach House, Barrio Café and Ranch Market have all made their mark on the stretch spanning from Midtown to Garfield, whether intentional or not.

Boom Boom LaRue could easily go unnoticed from the thousands of commuters who make their way down the street daily, but it is a staple to a very present and colorful community planting its roots in the Valley. From designer wigs, to size 14 high heels, to custom jewelry, this store truly has something for everyone. 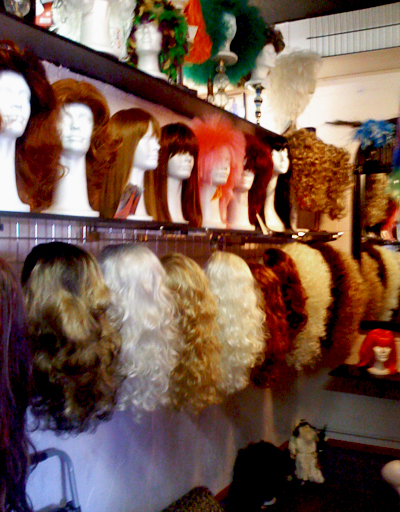 A selection of finds at Boom Boom LaRue

“Our clientele is literally across the board,” co-owner Joseph Paul explains. “We cater to everything from weddings, proms and drag queen pageants.”

Boom Boom LaRue has been in business for more than eight years, but moved to 16th just three years ago.

“The move to 16th Street was not intentional,” Paul continues. “A friend actually persuaded us to move down here. And, last year we expanded our store and now have a section for men — all this in a recession.”

Boom Boom and 16th Street couldn’t be a better pair. Paul credits the traffic partially to the fact that 16th is the first major street commuters hit when exiting SR-51 heading west into Central Phoenix.

The same curious shopper perusing the goods at Boom Boom LaRue can’t help but find him or herself wandering next door into a wonderland of refurbished and recycled goods.

Universal Furnishings and Offerings (UFO) has called 16th Street its home for nearly two years. Leonardo Ramirez, owner of UFO, said he had no idea what he was getting himself into.

“I was only going to rent an office space in the building for my graphic design business,” Ramirez recalls.

It was purely the right timing and perfect opportunity. Filling the space was easy, according to Ramirez, who had numerous storage units filled with collectibles ready to be sold. Aware this might not be the ideal time to open a new business, Ramirez understood resale is doing well, particularly in a recessionary economy. 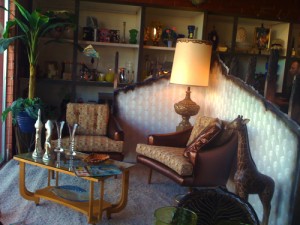 Reclaimed is the name of the game at Universal Furnishings and Offerings.

While Ramirez admits he is struggling, he has faith that people will see the use in the reused, recycled and refurbished goods he has to offer.

Besides giving new life to old things, UFO offers sewing classes and wall space to local artists. And, while 16th Street became somewhat of an accidental home for UFO, Ramirez couldn’t be happier.

“There is a cultural variation on 16th Street that’s trying to deal with itself,” Ramirez says of the cluster of eclectic businesses (and mindsets).

When thinking of the “cultural variation” now overcoming 16th Street, one cannot pass by Two Hippies Beach House without taking a second look.

Opening its doors only seven months ago, Two Hippies already has neighborhood regulars who walk their dogs down the surprisingly quiet residential streets that branch off 16th Street and plant themselves on the porch of the Beach House. They know the owner Robert Miller by name, and come prepared to partake in the tasty and incredibly affordable street food. Miller says it was no accident that he landed on 16th Street. 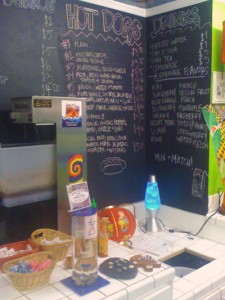 A glimpse at the selection at Two Hippies Beach House

“I lived in this area before and when the place came available, I thought it was a perfect match,” Miller says.

Although the Beach House has not been open long, Miller says business is good.

“People will come if you bring them something special and a little quirky,” Miller explains.

There’s no shortage of quirky at the beach house. The inside could easily resemble the set of a Cheech and Chong movie, but there’s also a certain comfort and old neighborhood feel that welcomes all.

The food is cheap and good, and Miller has somehow captured a true beach house feel in Central Phoenix, minus the sand and oceanfront, of course. The Beach House even hosts live music every second Saturday.

But Two Hippies aren’t the only ones with live music. Just a block south, Barrio Café features live entertainment on the weekends.

During the day, it might be easy to zoom past Barrio Café without realizing its presence, but nearly impossible to pass by at night. The custom ironwork, illuminated bar and line of patrons wrapped around the corner sparks the curiosity of countless drivers. But it’s not just the ambiance that keeps the customers coming back.

The restaurant planted its roots on 16th Street in 2002 and has no intentions of letting go. Partners Wendy Gruber and chef Silvana Salcido Esparza provide authentic southern Mexico cuisine and original creations in a modest locale that has food junkies from all over the Valley flocking to this unconventional location. 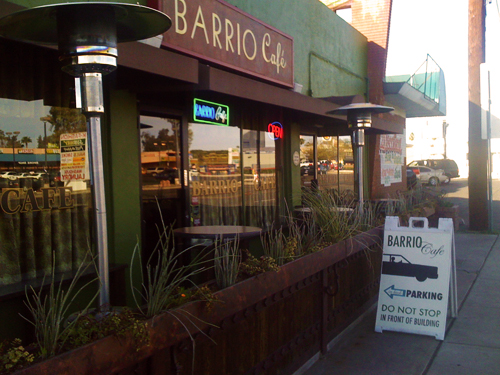 The laid-back café has only one golden rule: no reservations. Despite having only 17 small tables, patrons don’t mind waiting hours for a chance to indulge in the unique cuisine. In fact, they usually pass the time while sipping on decadent margaritas.

Richard Vick has worked at Barrio Café for just under six years.

“We’re always busy, every day of the week,” he says. “There really is no down time here, business is great on 16th Street.”

The bar, crafted out of an unfinished antique door with keyhole intact, is understandably tiny and only seats two. Outside, there is plenty of seating, allowing those who are waiting for their tables to watch the traffic go by and take in the urban vibe of the street. 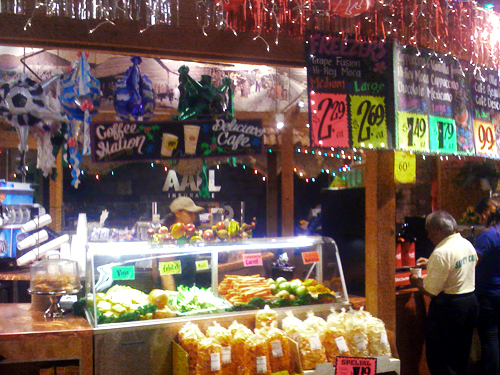 Ranch Market is one of 16th Street's longstanding landmarks.

As 16th forms the eastern edge of the Garfield neighborhood near Roosevelt Street, you cannot miss the mega grocery store that is Ranch Market.

The Hispanic supermarket is one of only nine in a chain that spans just three Southwest states.

Walk inside Ranch Market and you are sure to be overwhelmed. La Cocina, the kitchen, is the first of many departments you will encounter within the market.

Whether you’re in the mood for fresh baked goods, hot tortillas or homemade authentic Hispanic refreshments, La Cocina offers it all. But that’s just beyond the front doors. There’s an entire grocery store still left to explore.

Despite all the success Ranch Market is experiencing, there are still so many in the Valley who have yet to venture inside. It’s truly a world of its own, with foods, colors and smells inspired by Latin America.

16th Street has been overlooked for sometime, often serving as a quicker north-south route than 24th or 7th streets. But that is all changing, with artists, visionaries and chefs calling the humble street home. People are listening and making 16th Street a deserving Central Phoenix destination.