Thanks to Kim Moody and Dana Johnson for giving us permission to republish their tribute to Laurence Eugene Vanderbeek, co-founder of Alwun House. A fireside service will be held, Monday, November 22 at 6 p.m. in the garden he planted. 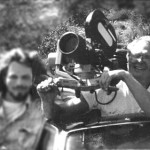 Shown here with hands-on camera in the early 80s.

We are saddened to announce the passing of our friend and pivotal Alwun House co-founder, Larry Vanderbeek.

Born and raised with 2 younger brothers in a sturdy Dutch Reform family, working the family farm and raising chickens in Firth, Nebraska. Served in Army Intelligence, went to ASU on GI Bill, and received his B.A. in 1964, Geology and Education (his Masters Thesis project built the original model of the nascent Pioneer Village). 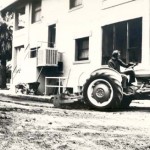 Larry breaking garden grounds in 1971 with a John Deer Tractor.

In 1971 joined Kim Moody and Long Island Realtor friend with a small band of visionaries to establish Alwun House; a home where the arts and community meet.

As a photographer, friendship with Fredrcik Sommer guided his fluidity in selecting “essential conceptual” imagery for Alwun House mime-centric theatrical productions engaging mimes, dancers, readers theatre, and a soundtrack — with his films projecting from an array of instruments.

When invited to perform for the 1984 International Mime Festival in Milwaukee, he was thrilled to sit in a specially wired chair demonstrating Alwun Theatre’s integrative technique. 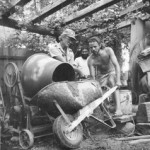 In the ’90s his search took a solitary path, choosing variously to live in Bisbee and Mogillon Rim communities. Now he’s the splash of color on our sunsets and tickles the muse playing in his Green Garden.

For Laurence Vanderbeek’s pivotal role in creating Phoenix’s landmark non-profit arts center, your contributions toward his memorial art monument will grow the vision of a Green Art Park for all to enjoy, expanding community blessings into this new millennium.

Your gift helps grow and sustain the dream of a House where we are All One, transforming our community through perseverance and the power of art. Click here to donate.