On Monday, the Suns came out flat and were never able to recover. They never got into a good rhythm, the bench didn’t contribute much and the Lakers just took it to them. Lamar Odom was a beast and Kobe was Kobe. Just like that, Phoenix was down one game to none in the Western Conference Finals.

Wednesday, things went a little better for the Suns. Phoenix showed some fight in the third quarter and received a huge game from Jared Dudley. After a lackluster fourth quarter in which the Suns committed four turnovers over a two-minute stretch, the Suns found themselves down two games in the best-of-seven series. When you get another awful shooting night from Channing Frye combined with little to no effort on the defensive end from Amar’e Stoudemire these results are to be expected. 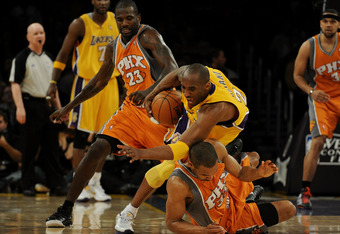 Kobe Bryant and the Lakers have run all over the Suns in the first two games. Photo courtesy of Getty Images.

So, where does that leave us? For starters, it means we’ll be hearing a lot of talk from obnoxious Lakers fans over the next few days. And yes, it’s OK to call them obnoxious. They know they are. In fact, I’m pretty sure they pride themselves on it.

More important than putting up with LA fans, the Suns’ performance in the first two games leaves Planet Orange with an uphill battle on their hands — not an impossible battle by any means, but definitely a tough one.

I was wrong about the start of this series. I thought the Suns would come out with more intensity and steal a game in LA, but they didn’t. They did have their chance, though. That is why I believe there are positives to be taken from these two losses, such as the play of Robin Lopez, and I still fully expect Phoenix to win this series.

In game two, the Suns beat themselves more than Los Angeles did. To start the second half, the Suns came out great and played their basketball and dominated the quarter. They stopped with all the constant doubling and forced the Lakers to hit shots with a hand in the face. When the Suns do this, they can be very effective against the Lakers.

The key to beating LA is forcing Kobe to do everything himself. To do that, Phoenix needs to defend him straight up, one-on-one. If he hits a tough shot with Dudley or Grant Hill defending him, so be it. Giving up two to Bryant is much better than giving up three to Ron Artest, Derek Fisher or Shannon Brown. The thing about Artest, Fisher, Brown and the other Lakers players capable of hitting the NBA super shot is that they only do so when wide open. Put a hand in their face or force them to put the ball on the court and more often than not they’re going to miss.

Outside of not allowing open threes, the Suns need to get better play out of Amar’e and Frye. Both players are looking for new contracts this summer and this is the time for them to go out there and earn them. If Amar’e and Frye come out and play with passion and heart, the pieces will fall into place for the Suns. I expect STAT to be more of a force on the boards and Frye’s shot to return once the series switches to Downtown Phoenix.

After Gentry and the boys review the film, I think they’ll make the correct adjustments. When the dust settles in Phoenix on Tuesday, this series very well could be all knotted up at two games apiece.