Sips and Grub | Chicken in Phoenix Nest at China Chili

Odd couples are a staple in today’s world. This came to mind when considering my recent venture up 3rd Street to China Chili. Contrary to the name, the place does not specialize in chili, much to my chagrin, but it does serve up some raucously good Chinese food. So, in my mind, it’s only halfway false advertising.

Interestingly enough, you are greeted by a giant, waving, golden cat as you walk in. Basically, the décor is like most other Chinese restaurants you have ever been to. In other words, old people dining in the corner, a golden Buddha statue awaiting a belly rub and oddly bright light fixtures adorning every few feet of the ceiling. 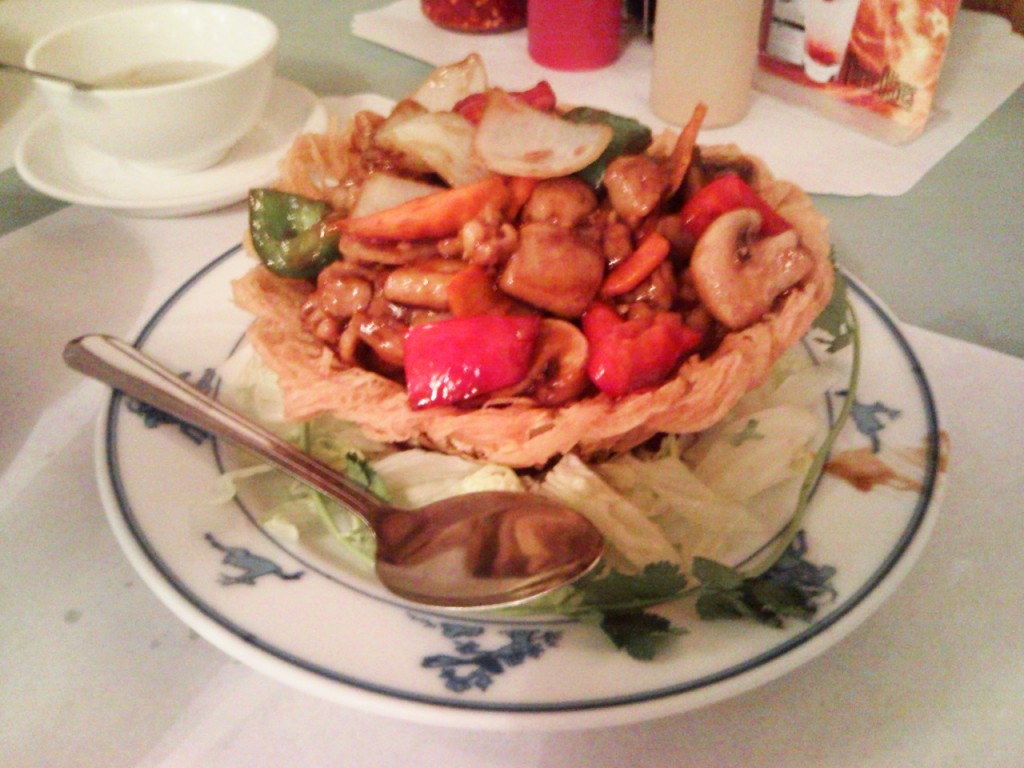 This particular trek was made with DPJ managing editor Si Robins in tow. In keeping with the odd couple theme, he schooled me on how the Jewish folk have their own Christmas traditions. Apparently, it is common to find most of the chosen community dining at the local Chinese restaurant on Christmas Day. Sounds like an interesting dining experience to say the least.

However, on this night, I was on a mission to tackle a mountain of cuisine named in homage of our fair city, the Chicken in Phoenix Nest. It consists of a mound of chicken, peppers, onions and carrots in a black bean sauce, but with a kicker — it’s served in a crispy potato “nest.” Yes, it looks exactly like it sounds. When it was brought out to my table, the interwoven strands of potato perfectly resembled a finely constructed nest. What makes it impressive is that it was scrumptious. The crispiness of the encasing “nest” countered the soft, succulent chicken bites harmoniously. And, even though bean sauce doesn’t jump off the page as a description of taste bud bliss, the soy sauce-esque mixture holds the entire dish together. It felt like a Jewish Christmas dinner in my mouth, complete with the celebratory shouts of joy. Mazel tov, China Chili, you have concocted a fine dish.

Even though I raised my voice in joyous praise to the dinner, I could not finish it. The generous portion makes this a meal worth a stop next time you’re in Midtown Phoenix. There is good reason that China Chili boasts the praise of several locals as “the best Chinese restaurant around.” This humble, Southern gentleman will have to absolutely agree.

In this story: China Chili, Downtown Phoenix, Sips and Grub