Letting Out the ‘Secret’ at the Actors Theatre

Imagine that you are a scientist and you think you have found the cure for cancer. What is the next step besides letting the world know of your discovery? 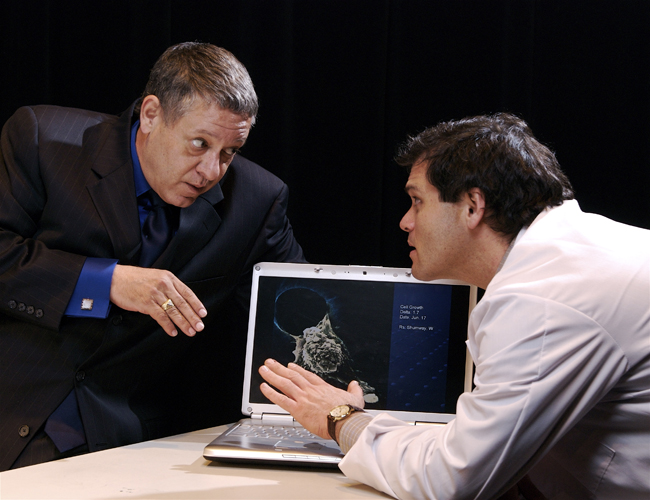 'Secret Order' is playing at the Herberger Theater through March 21.

Secret Order, now playing at the Actors Theatre, guides the audience through the journey of a young scientist and his new discovery. Along his path, he faces the many trials and tribulations that come with such a significant breakthrough. From starting at a meager university to being funded by an accredited cancer research and learning facility, he faces many obstacles along the way that center on the worldwide interest in finding a cure for cancer. The play touches on faith versus science issues, moral and political dilemmas and even sex in the workplace. In a world full of hungry people that just want to get ahead, you learn that it is all about being published first and getting your knowledge out there before anyone else possibly can. Poor William Shumway, played by Cale Epps, learns a hard lesson when in the end all fingers point to him for withholding pertinent information. All the while, he was merely trying to please his mentor and help out an undergraduate colleague.

After the play, we were graciously invited to stay and speak with the cast. It was acknowledged that the writer Bob Clyman is a clinical psychologist whose brother is also a scientist; one had to wonder, since the play seemed so accurate. I thought at first I might be lost in all of the scientific terminology, but the play is written so well that it made more sense to me than when I took biology in college. Well, OK, maybe not, but you can keep up with every bit of this play without worry if you don’t happen to be a scientist. Although many questions were asked and a discussion ensued, I still left with much to think about. With the motto of the Actors Theatre this season being “Entertain Your Brain,” I think it was sincerely achieved with this play.

Secret Order is playing at Stage West at the Herberger Theater until March 21, 2010. If you care to tease your brain a little and see a very interesting and entertaining play that makes you feel like you are right in the lab with the scientists, I highly recommend seeing it!