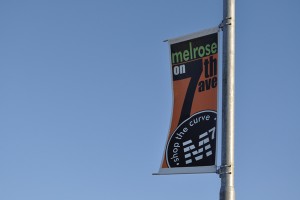 We now gently remind you to "Shop the Curve."

In just 10 years, the m7 Street Fair has gone from a few folding tables and vintage cars to a signature Valley event attracting tens of thousands of attendees. It’s no secret that the Melrose area, aka Melrose on 7th, is a hub of eclectic shops, specialty stores and food and drink culture, but no one quite expected the word to get out so quickly.

In 2001, the fair launched as a means to announce the formation of the Seventh Avenue Merchants Association (SAMA). By 2008, there were 12,000 attendees. This year, they’re expecting up to 20,000 at final count.

Besides promoting general awareness of the district’s attractions, the goal of m7 is straightforward: to raise money (through booth rentals) to fund the SAMA newsletter, Artlink bus stops for First Fridays and advertising initiatives. No money raised goes to personnel. Most importantly, the event is always free, which is certainly enticing for those thinking about attending.

Saturday’s event promises to be the biggest and best yet. The goal is “bring your business to the street.” With over 145 booths spanning 7th Avenue from Indian School to Campbell, it’s safe to say it will be fulfilled. The buy-local mindset will be in full force, and surely everyone will be able to discover a local business they didn’t know about. Expect vendors, handmade crafts, food (16 booths total), community groups and more. Though there is no beer garden, Pat O’s Bunkhouse and Los Compadres will have “extended patios” to house those needing a brewski.

As from the beginning, the fair will also feature some tricked-out hot rod cars — 125 in all. We dare you to find just one that you like.

Another goal of the event: To raise awareness about the great bordering neighborhoods in the area: Carnation, Woodlea Melrose, Grandview and Pierson Place. Each has its own feel and character, but they share the Melrose Curve as their burgeoning center for arts, food, shopping, entertainment and fun.

As if all the above wasn’t enough, there’s plenty more on hand: a kid’s area with crafts, face painting and rides; a scavenger hunt and music by Dry River Yacht Club, Michelle Blades, Lonna Kelley, Fatigo and RastaFarmers.

Special thanks to Yuri Artibise and Meghan Olesen for their help with this post.

In the Know: m7 Street Fair