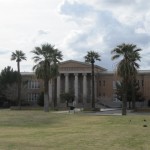 The view of the Kenilworth School from Hance Park

It’s impossible to miss from several thoroughfares — 3rd, 5th and 7th avenues and I-10, in particular — the massive Neoclassical building teetering on the edge of the former Kenilworth Historic District (now part of the larger Roosevelt Historic District). It is the Kenilworth School, and it has been enriching Downtown elementary students since 1920.

Construction of the school began in 1919 using architect Verne Wallingford’s design, heavily influenced by Revival-style lines that were popular in the 1910s and ’20s.

Remarkably, the building is in fantastic condition and still operating as it was in 1920, despite 90 years of children running through its halls. A major renovation occurred in 1981, but perhaps the most remarkable feat is its current location: mere feet away from the walls of I-10. The school was spared from the freeway expansion, which cut through neighboring buildings to the south and through parts of the F.Q. Story neighborhood to the west. The school now has convenient 5th/7th Avenue entrances off the interstate.

One of few A++ schools in the area, Kenilworth has a proud tradition in Roosevelt. Famous alumni include Margaret Hance (namesake to the neighboring park across 5th Avenue) and Barry Goldwater.

Sources: Staging a Comeback — The Arizona Commission on the Arts by Gerald A. Doyle & Associates, P.C.; National Register of Historic Places