For the last week or so, it looked like Amar’e Stoudemire was definitely on his way out of the Valley of the Sun. Last night’s game against the Mavericks was going to be his curtain call. Then, at approximately 5 p.m. Phoenix time, the Cleveland Cavaliers made a trade for Antawn Jamison of the Washington Wizards. Shortly thereafter, Joe Gambadoro of KTAR reported that Stoudemire would remain a Sun.

At first I thought this would throw wrench into the blogged I had planned out. I was all set to write about what may happen in the city of Phoenix if STAT leaves town. After much eternal debate, I’ve decided to write that blog anyway. So, just in case the reports are incorrect, here is what I expect to see happen if Stoudemire is dealt sometime before today’s 1 p.m. trade deadline. 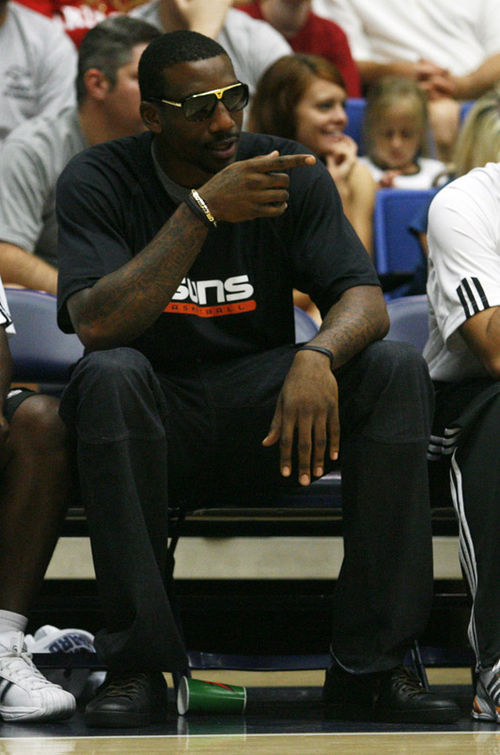 Amar'e, you and your cool glasses can stay in Phoenix.

Schwartz Laser Eye Center will go out of business.

I’m not sure why this hasn’t been talked about yet, but nobody would be affected more by a Stoudemire trade than Dr. Jay Schwartz. Stoudemire has been putting the Schwartz children through college. I’m not just talking about the recent eye problems Stoudemire has had, either. Since arriving in Phoenix back in 2002, he’s been paying visits to Dr. Schwartz. Many people may not realize this, but STAT was legally blind (or at least close to it) in one of his eyes early on in his career. Schwartz fixed that right up. Then, of course, there’s the infamous torn retina that Stoudemire suffered last year. I don’t know how much these different eye procedures cost, but I’m sure those are funds that Dr. Schwartz would hate to lose.

This one could happen even if Stoudemire doesn’t get traded with the way the restaurant has performed up to this point. Clearly, paying a big-time athlete to use his name as the name of your restaurant hasn’t helped, so why not let bench-warmer Taylor Griffin take it over? He needs to do something while he’s in Phoenix. Do I have any proof that he can cook? Nope. Do I have any proof that he likes to cook? Nope. Do I have any proof that he has any desire to have a restaurant named after him? Nope. I do know that he’s from Oklahoma, though, so naturally I assume he knows a mean barbecue. Who wouldn’t want to get some barbecue ribs or chicken and corn on the cob before or after a game? I know I would. I know Kenny Bump would be all over this! Mr. Griffin, what are you waiting for?

You’re probably really confused by this one, so let me explain it to you. Kids in Arizona hated wearing protective eye wear. Can you blame them? They mostly look horrible and are a surefire way to encourage bully attacks. A kid wearing glasses is definitely uncool, and said kid never has any lunch money. Wear glasses and want to play sports? You’d get picked on more for wearing hideous goggles. That all changed once Stoudemire began to wear his goggles on the court and his nifty Weezer-esque glasses off it. Now it’s suddenly hip to wear glasses. All the cool kids are doing it. So, what happens if Stoudemire leaves Phoenix? Kids resort back to their old ways. They stop wearing their glasses and start running into things. They get poked in the eyes. Basically, they all go blind. Can Robert Sarver sleep at night knowing he is personally responsible for causing every young child in Arizona to go blind? I know I couldn’t.

So, there you have it. If Stoudemire gets traded, our doctors go out of business and our kids go blind, but we do get a better restaurant. I guess one out of three ain’t bad.