The ‘Coolest’ House in Phoenix

Much has been made about the potential of using the sun’s energy to provide clean energy in the Valley of the Sun. While the bulk of this attention has focused on solar power, one local company is taking advantage of the sun’s energy in a different manner: geothermal power. 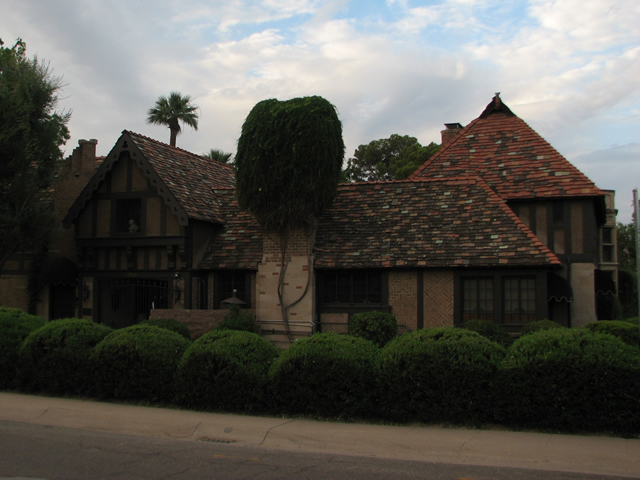 GeOasis has developed a unique solution to meeting the Valley’s home cooling and heating needs using the solar energy stored just below our feet. The temperature just below the earth’s surface remains a consistent 70º year round. By dispersing heat into or retracting heat from this steady source, geothermal equipment is not forced to battle with Mother Nature. In the winter, this heat is transferred through underground pipes, concentrated and delivered throughout the home. During summer, the excess heat in a home is removed and delivered back to the cooler earth, completing the cycle. By contrast, a conventional air-to-air system has to move heat from a home into an already high outdoor temperature. This is much less efficient than a geothermal system that is able to dispel heat into the 70º soil.

One of GeoOasis’ first installations was an unexpected choice: a historic Tudor home in Central Phoenix’s Alvarado neighborhood, nestled behind the Heard Museum. The Carter Gibbes house was built in the late 1920s by owner Carter W. Gibbes and builder Neil H. Gates. Its design is strongly influenced by a combination of the English Tudor and French Chalet styles of the era. The house is listed on the city of Phoenix historic preservation site and the National Register of Historic Places.

The application shown in the home's basement. This can alternatively use a garage or be a package unit on the roof.

The 12-room, 6,000-square-foot, three-story house could not be lived in during the blistering Arizona summers. Temperatures did not drop below 86º in the first-floor living areas, and soared well above 100º in the second- and third-floor bedrooms. The owner, Sid Rosen, considers himself a caretaker for the preservation of the historical house. Rosen has invested over two decades of time and effort to maintaining, restoring and preserving this piece of Arizona history, working with some of world’s leading preservation and renovation professionals. While he was able to retain the historical character of the house, including a unique slate tile roof, finding a sustainable way to cool it was another matter. Despite searching for years, and investing in top-of-the-line energy-efficient systems, Rosen was never able to achieve his goal of maintaining a comfortable indoor environment in the extreme heat of a Phoenix summer. In the spring of 2009, he found a solution when he met Bryce Johnson, CEO and founder of GeOasis.

Since the installation of the geothermal hybrid system developed and installed by GeOasis, the Carter Gibbes house is now livable year round. Better yet, it has realized cost savings of over 65% compared to traditional cooling systems and with a significantly lower carbon footprint. Moreover, the installation of the system was done in a way that enhanced the historical characteristics of the house.

“One of our foremost goals, apart from achieving the desired temperature reduction for the home and lowering the cost factor, was to not to disturb the home’s original historic character and to remove all eyesores of prior energy systems,” says Johnson.

Rosen is now able to host his numerous and important charitable, civic, historical and social events year round, including his 70th birthday celebration, held just days after the system was installed in June 2009. In addition, he is happy to be a step closer to his ultimate goal of achieving national energy independence, through conservation and sustainable efforts.

“GeOasis allowed me to reclaim my home during the hot Phoenix summer,” Rosen says. “I feel good that I have reduced my personal energy dependence and am proud to be contributing to the USA’s future energy independence.”