.anti_space Moves to the Warehouse District

Alternative art gallery .anti_space is moving from its Roosevelt Row ‘hood to a 7,000-square-foot warehouse off 7th Avenue and Buchanan Street.

Owner Scot McKenzie says the move is partially for more space, but mostly for more creative freedom. The kind of art he encourages — everything from electronic music to experimental and abstract art — is something that “most people in Phoenix don’t get.”

The electronic music he creates is representative of “other other side of life that you don’t get to see,” he says. “I want someone to see what I’ve seen in my head. It’s like something I see in that speaker. The space between one and zero. The analog. The space between the beat.”

McKenzie says that at first, the First Friday idea seemed to work as a way to showcase experimental art. But, when it quickly dissolved into “kettle corn, screaming kids and cops everywhere,” he knew he needed a new space. A bigger space.

“It was fun while it lasted,” McKenzie says of First Friday. “But, it wasn’t conducive to me being creative. If it’s a swap meet, I don’t want to do it.” 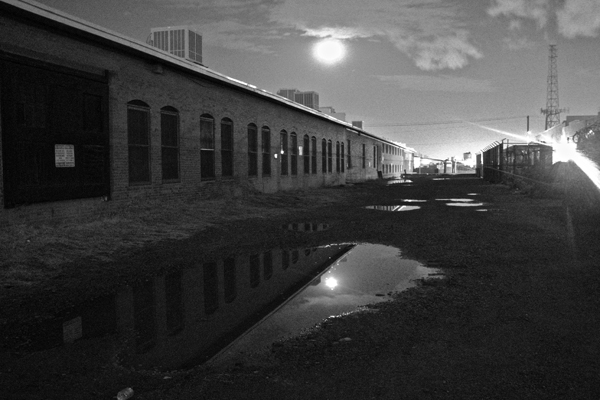 The new .anti_space, set to open this spring

So, McKenzie found the warehouse, which was an old prop storage facility for an Arizona children’s theater company. He and a team of volunteering friends have just started the renovations, aiming to be open to the public by Art Detour 2010, but he acknowledges it will never be fully completed.

“It’ll never be done,” McKenzie says of the space. “It’ll always be a work in progress. It’s an always changing space.”

The nature of this space lends itself perfectly to the art McKenzie looks to create and hopes to house. In the past, .anti_space has shown work from the likes of Jason Hill and Luster Kaboom. In addition to continuing to show these and other works, he plans to have part of the warehouse be an area for restoration of old mod scooters, a hobby of his.

With this reimagined .anti_space McKenzie wants to show “anything that has beauty. It doesn’t seem to jive,” he says of the scooter aspect, but, “there’s nothing that’s not beautiful about that.”

The warehouse will have floor-to-ceiling gallery walls up to 14 feet tall and an anticipated five studios, but it also takes McKenzie back to his roots.

“It’s my biggest art piece,” McKenzie says of the space itself. “We’re going to try to make this one what we wanted the other one to be.”

For McKenzie, that means a return to the minimal. The warehouse is going to be a huge focal point for this space. He plans on lighting the bare beams, keeping the cold, cement feeling by painting the entrance walls to the gallery black and he even hopes to strip the outside façade down to its bare bricks. The fascination with warehouses began years ago when, at a younger age, he would explore the old warehouses in Phoenix.

“We used to break into warehouses because no one gave a shit about that stuff,” McKenzie says. “We were finding old junky spaces that people were letting us fix up.”

He later would use one of these spaces to create the first .anti_space, which was then located off of 9th Avenue and Madison Street. Let’s hope this move back to that original neighborhood is just the inspiration he needs.

The current .anti_space is currently located at 718 N. 4th St. in Evans Churchill — 602.256.ANTI. The new space, set to debut this spring, will be located at 715 W. Buchanan St. in the Warehouse District.