The 68th anniversary of Pearl Harbor, now known as Pearl Harbor Day, falls on Monday, December 7. In commemoration of this worldwide day of remembrance, the city of Phoenix is holding its fourth annual Pearl Harbor Day Walk.

The 2-mile walk begins at Phoenix City Hall (Washington Street between 1st and 3rd avenues) at 11:30 a.m. and heads west to the Arizona State Capitol (Washington Street and 17th Avenue), then loops back around to the starting point. The entire walk should take an hour or less. The stop at the State Capitol is significant on this day, as the anchor from the USS Arizona, the ship that sunk during the attack 68 years ago, rests there.

The goal for the walk is to have 1,177 people participate — one person to honor each of the brave souls that lost their lives that day. Sign up is easy: Simply send an email to pearlharbordaywalk@gmail.com.

Check-in for the walk begins at 9:30 a.m. on the east side of City Hall. Coffee will be given out for the first 120 participants, donated by St. Josephs City Hall Starbucks.

The State Capitol will also conduct its annual Pearl Harbor memorial service at 11 a.m. on Monday.

Take the light rail to City Hall — station at Central/Washington. 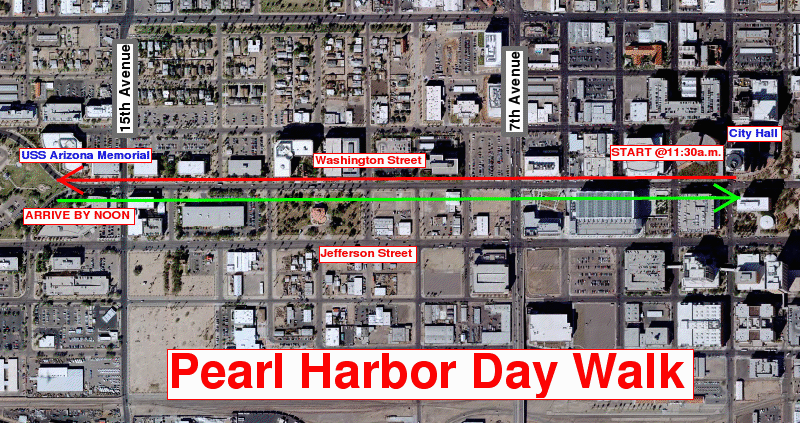 The route of the Pearl Harbor Day Walk