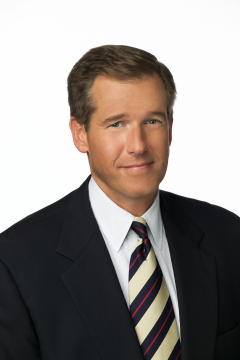 If you’ve never seen Brian Williams outside of watching him host NBC Nightly News, the first thing you should know about him is that he’s very, very funny.

You can watch his funny side on old episodes of Saturday Night Live or The Daily Show, or hear him on Wait Wait… Don’t Tell Me! Or, you can show up at an awards luncheon where he’s speaking.

In front of a crown of more than 1,000 journalism and business professionals, he was entirely too willing to make a penis joke about Walter Cronkite.

“Walter Cronkite was the first of the Mad Men,” Williams said from the podium, referring to, well you know exactly what show he was referring to. Williams went on to talk about how shirts, and those in any kind of power, only came in white back then. And, that pants were huge.

“Walter’s (pants) came up to his chin. At times, you could see the real Cronkite endowment.”

The crowd lost it. Members of the Cronkite Endowment Board of Trustees were present and had been introduced earlier, making Williams’ deadpan even better.

This black-suit-and-tie audience was assembled at the Sheraton Hotel in Downtown Phoenix on Wednesday, November 18 to celebrate Williams receiving the Walter Cronkite Award for Excellence in Journalism.

“This honor that you’ve given me today, all the jokes aside, is the highest honor I’ve recieved above all in my career — I get to have my name mentioned alongside Cronkite, in the same sentence as the man I grew up wanting to be,” Williams said during a more serious moment as he reflected on receiving the award.

Williams had a great admiration for Cronkite, both as a journalist and as a person. He called him incredibly kind, devoted to his craft and the cutest man on God’s green earth, complete with fluffy white hair and bushy eyebrows.

“Professionally, the day he died is the day I lost my North Star,” Williams said. “I learned all I know about the world from Walter Cronkite.”

For all the awards and accolades Williams has received, and considering the 9-million-plus pairs of eyeballs that watch him host the news every night, Williams is a genuinely humble broadcast journalist.

He’s quick to offer that he was just a hard-working kid who got some lucky breaks. He never earned a college degree.

“I insist, and I promise you that I’m the least qualified of the 26 recipients [of the Cronkite award so far],” Williams said. “And, even the next 26 recipients of this award.”

The Cronkite Award has been presented annually by the Walter Cronkite School of Journalism and Mass Communication at Arizona State University since 1984 to journalists who stand out as superstars in their field. Previous recipients include George Will, Helen Thomas, Andy Rooney and Tom Brokaw, whom Williams inherited Nightly News‘ anchor chair from in 2004.

This was the first time the award was given since Cronkite’s passing in July of this year. Cronkite, along with the Endowment Board, would select the recipients each year. Williams is the last whom Cronkite had a hand in choosing.

“Think of that ratio — 26 of us, one Walter Cronkite. The way I see it, that’s they way it should be. More importantly, that’s the way it is,” Williams said, ending his acceptance speech with the same trademark signnoff of the man who Williams said brought him the world.