What’s this, a puppet slam? Never heard of it, no clue what that means… puppets… slam?  Who knew a puppet show could be adult oriented? The Great Arizona Puppet Theater did! It isn’t very often that great puppeteers get together and do a puppet show for the 18+ crowd, so when it does happen, it is a must-see. This special occasion was in honor of Thanksgiving, labeled “The Raw Turkey Puppet Slam,” and our host for the evening was Hector the sock puppet. Now, being forewarned of the obscenities that were to come, we knew we were in for some sort of treat.

The first puppet show up for the evening was performed by Nataliya Khusid, who is from Russia and now resides in Detroit. The piece was entitled “L’Histoire d’Amour,” a beautiful French love story portrayed with two small hand-face puppets and French music. It was simply gorgeous to watch, as her hands mimicked the bodies of these faces and showed us a story about a woman reluctant to fall in love and a man persistent enough to pursue her until she gave in.

Next up, Dan Dan the Puppet Man presented Dolly Parton performing “Great Balls of Fire.” That’s right, a Dolly Parton string puppet performing the popular song from Jerry Lee Lewis. It’s incredible to watch someone move every part of the puppet with strings as though it were a real person performing live. The performance was clever and quite entertaining!

Nancy Smith, Director of Great Arizona Puppet Theater, put on the next show for us, “Owl & the Pussycat.” Imagine a person dressed as a puppet box with hand-drawn puppets on a stick. Yes, that is the kind of show she put on for us. It was another love story, this one about an owl and a pussycat who travel the world in a boat, find a ring from a pig and get married by a turkey.  Are you intrigued by all this yet? We were clamoring for more!

Khusid performed another short show for us just after intermission, and then it was on to Tommy Cannon of Cannon Bros. performing “Gila Monster.” This puppet show did not star your average puppet — no sock, no strings and no masks. No, this puppet was made out of Khusid’s hand and a pair of eyes. Wildly entertaining and silly, we laughed as Tommy performed behind the curtain yet interacted with the Gila monster that was his hand.

The final performance of the evening was called “Little Bunny’s Halloween” and was performed by Gwen Bonar of Rude Rabbit Productions. Acted out with a stuffed mama bunny and a stuffed baby boy bunny, this piece was the perfect nightcap! Baby boy bunny was afraid of Halloween, so mama bunny decided they should practice Santeria instead. You can only imagine the antics that followed.

The group performs on a regular basis for children Wednesdays through Fridays at 10 a.m., Saturdays at 10 a.m. and 2 p.m. and Sundays at 2 p.m. The next adult puppet slam will be on January 1, 2010, and DPJ thinks it’s a great idea to ring in the New Year with an off-the-wall puppet show! The best way to stay informed is to check out our calendar of events, or you can visit the theater’s website at azpuppets.org or call 602.262.2050. 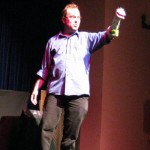 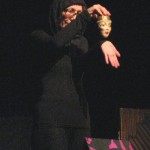 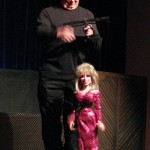 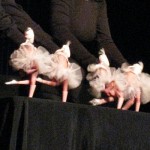 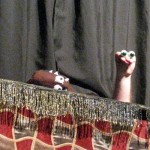 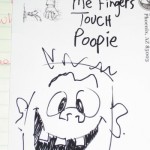