Disclaimer: According to owner Doug Davis, Chemical Relief closed its doors on October 12 due to a lack of funding.

There’s a new bright spot in Downtown Phoenix for foodies with an eye for the organic, natural and hip.

Chemical Relief, a snack shop with plans to one day be a cooperative grocery, has opened residence on the main floor of the monOrchid. Nestled amid the local tenants of the building, which over the years have included various studios, production houses, designers and attorneys, Chemical Relief was the answer to bad digestive issues and a city that needed more natural selections. 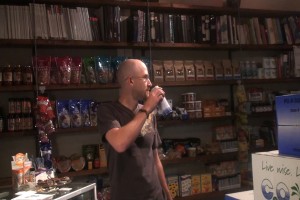 Chemical Relief owner Doug Davis enjoys one of his favorite products at the shop: coconut water.

The brainchild of Doug Davis, the shop is filled with the types of food that he says helped him recover from a painful digestive disorder.

“I’m a sufferer of Crohn’s disease,” Davis says. “I was diagnosed at 16, and I was on the operating table at 23. I was about to have another surgery when I asked the doctor if I would be cured after this. He bluntly said, ‘No, you’ll probably have many more surgeries in your life.'”

That bleak statement made Davis sit back and consider other options.

“My reaction was, there’s gotta be a better way,” he says.

That better way took the former food broker down a path that he says led to complete recovery from the disease.

“I healed myself of that using whole foods, supplements, probiotics and digestive enzymes,” Davis says. “Natural foods has helped change my life extraordinarily.”

The shop now carries some of those items Davis used, as well as quite a random assortment of grocery store-like products, including baby care, bath products and car wash materials. Davis also carries some fair trade jewelry, with proceeds going directly back to the makers. 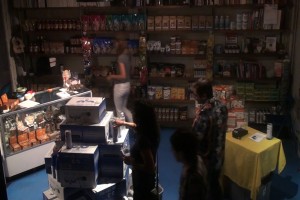 The selection is still relatively small, as the store has only been open a few weeks, but it was heavily trafficked during October’s First Friday. The monOrchid location on Roosevelt Street between 2nd and 3rd streets is one of the most traveled areas, and many stopped in because they were steered in from the volunteer outside, or to check out the gallery in the back of the building or use the restrooms.

“I just want to make all this stuff available to the community,” Davis says. “There’s not anywhere within 10 miles to buy natural food, really.”

The store has about 100 to 150 products on its shelves so far. Some of them are sourced locally, like Laura’s Granola from Tempe. One of Davis’ favorites: canned coconut water.

“It’s the best substance on earth for you to drink,” he says. “It’s the most easily absorbed substance and it’s the original Gatorade.”

Chemical Relief doesn’t have set hours yet, but most days passersby can see Davis and a crew of volunteers manning the shop. He sees setting those hours, expanding to a full co-op, adding a coffee shop and Internet bar all on the horizon.

“I just want to make all this stuff available, Davis says. “I think the community’s going to be extremely supportive.”