It All ‘Adds’ Up: Christoph Kaiser and His Garfield Neighborhood 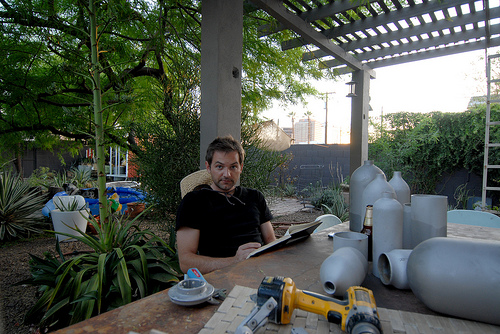 Kaiser is part owner of the architectural firm Plus Minus Studio, founded by him and his business partner Hayes McNeil in the fall of 2005. Since its founding, they have added Anson Chen to their team as Project Manager. The studio has been responsible for some of the most striking projects in and around Phoenix, including transforming Katz’s Deli into Postino Central and the complete remodel of Kitchen Sink Studios in Downtown Phoenix. In addition, Christoph has recently joined Hayes as partner in the new Royal at the Market coffee shop at the soon-to-be-opened Phoenix Public Market Urban Grocery and Wine Bar.

While this portfolio is indeed impressive for a young architect, it is his personal projects in the Garfield neighborhood that captured the attention of DPJ. Garfield is the oldest historical district in Phoenix. First established in 1883, it became part of the city of Phoenix in 1899. Houses in the neighborhood date from the 1890s to the 1940s, with a large percentage built in the early 1900s. Unlike the grand dames of Phoenix’s historic districts, Willo and Encanto-Palmcroft, which have mostly remained intact and have dramatically appreciated in value, the historical homes in Garfield fell on hard times over the past three decades.

Kaiser purchased and remodeled his first house in Tempe while still a student at ASU. After graduating, he set his sights on Downtown Phoenix because of the dynamic changes occurring Downtown and the availability of affordable historic homes. “Historic homes put me at peace,” Kaiser says. He also notes that older homes encourage commitment, something that is lacking in many of the interchangeable stucco boxes that popped up in the suburbs during the real estate boom.

The Garfield neighborhood has changed a lot since 2005, when he first moved in — there was still gang activity on his street back then. At that time, Kaiser felt like he was the only one trying. Rather than be deterred, however, he saw this as an opportunity. Not only were the prices right for an architect with shallow pockets but deep vision, but also the dire shape of the area provided opportunities for creativity that would not have been available in other neighborhoods. He has seen a dramatic change over the past four years, brought about, in part, by a shift from renters to owners who are renovating their homes as well. In addition, the remaining landlords are paying more attention to the upkeep of their properties in hopes of attracting new tenants from ASU and the Biomedical campus. 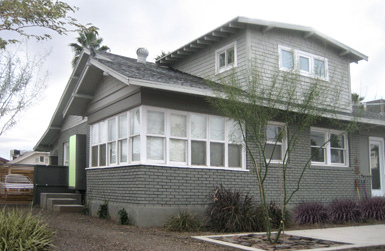 A mixture of old and new

Kaiser’s desire is to create interesting living spaces for the working class and students. They are a unique alternative to the condo towers and apartment blocks that we normally think of as “urban living.” His approach to design and architecture is akin to an unfolding progression. When you first approach his homes, they look largely like they did when they were first built, as he has done his best to respect the exterior’s authenticity. One of the only differences is the desert-friendly landscaping. Once you step inside — or around back — however, you enter a realm of the unexpected.

Kaiser takes the concept of place-making to a micro level. While the term traditionally refers to creating neighborhoods, he creates places as small as a garden patio. To create such a place, Kaiser pays particular attention to creating a sense of arrival, where it feels like you are entering your own world, despite being just steps away from the bustle of Downtown. As a result, he is as interested in the outside of his houses as he is with the interiors. He has spent a lot of time researching indigenous desert plants and has planted many varieties of mesquite. He is now experimenting with interspersing fruit trees between the desert trees, because, he states with a wink, “After all the work I put into planting, watering and otherwise maintaining my yard, it would be nice to get something back.” 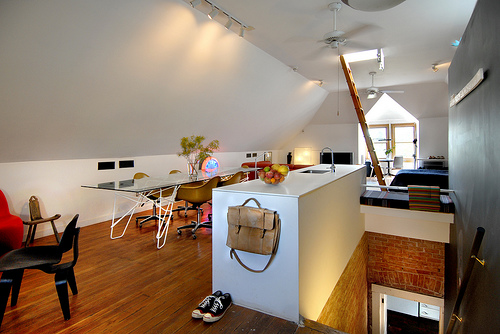 On the inside, Kaiser tries to fit as many unique living spaces as possible. He has created units in once-empty attics and created communal living spaces on the main level for people renting out bedrooms. Christoph fills each place with whimsical touches, including an intriguing mix of vintage finds and high-tech conveniences. While there are plenty of IKEA products throughout his unit, due to their affordable-yet-stylish forms, he also has several higher-end pieces that were custom made to maximize the use of space. In addition, he is in the process of building unique living spaces in his back yards, including a renovated 1967 Airstream trailer and a corrugated metal silo that he is constructing as a self-contained living space. He notes that the four to five people living in each of his houses, while dense by today’s standards, was the norm when the houses were first built. The only difference is that they were families living together back then, while there are friends living together today. This added density allows for more affordable rents, attracting a mix of students, artists and creative young professionals.

A good way to describe this combination that Kaiser has developed is to use a phrase coined by Alison King of Modern Phoenix: “Mullet Modern — conservative in the front, party in the back.” According to Kaiser, “Neighborhoods need some interest, with some more aggressive or edgy touches to attract diverse types of people, yet still being respectful of the neighborhood’s authenticity.” He admits that many of his ideas wouldn’t fly in a more established historic neighborhood, but in a recovering neighborhood like Garfield, they are a perfect fit. 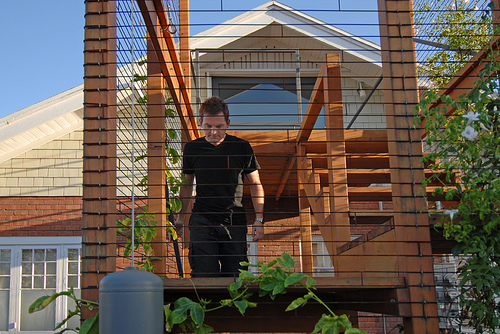 All photos courtesy of Christoph Kaiser