If you enjoy living, working or playing in Downtown Phoenix, chances are you owe a thank you to the Downtown Voices Coalition (DVC). Formed as a result of a 2004 summit of Downtown stakeholders, the coalition has been working behind the scenes to ensure the continued growth of the core based upon existing local resources.

Coalition members are unabashedly dedicated to supporting the local, independent business owner over the big-box developer or out-of-town corporation. They are strong advocates for existing Downtown neighborhoods and residents, the arts community and the unique historic properties throughout Downtown Phoenix. These are interests that DVC feels have been lost in the rush to redevelop the core. In the words of Steve Weiss, Chair of DVC, “If not us, then whom?”

While DVC has been criticized in the past as being an insular group catering to like-minded people, this is due largely to the fact that the group is more interested in acting than promoting itself. And, these volunteers have indeed been busy. On any given issue affecting Downtown Phoenix, you will find DVC working with other community groups, meeting with city leaders, speaking at zoning hearings and serving on city committees. Some recent issues it has been involved in include extending the weekend hours for light rail, pushing for shade structures at the new ASU nursing building and saving the Sun Mercantile building (the last remaining historic Chinese-America building in Downtown) from a “façade-ectomy” that would have destroyed much of its authenticity. Despite the criticisms, DVC has been promoting its monthly meetings and publishing its agendas and minutes on its website for some time.

Anyone who is interested in Downtown Phoenix is encouraged to attend and participate in DVC’s monthly meetings, held the second Saturday of every month, starting at 9:30 a.m. at the Roosevelt Commons meeting room. Each month they cover a variety of issues related to Downtown, and often feature guest speakers and other community groups. 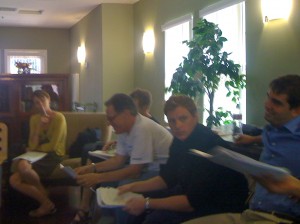 For example, during the September meeting, the 20 or so people in attendance heard from Kimber Lanning of Local First Arizona about the city’s adaptive reuse task force that is looking at ways to simplify the process of adapting existing buildings for new purposes. Lanning also talked about Local First’s upcoming 10% Shift campaign that will ask Arizonans to shift 10% of their current spending from national chains to local businesses. This change is estimated to create thousands of new jobs throughout the state while stimulating billions of dollars of new economic activity. Check back with DPJ for future news on both of these issues.

Next up on the September agenda was Carol Johnson from the City of Phoenix Planning Department, who was invited to update the coalition on the planned Jackson Street Entertainment District and the Downtown Urban Form guidelines. She also talked about the city’s general plan update, which is getting underway this fall. This year’s theme is “Imagine Phoenix in 2050 — What Do You See?” and will involve extensive public consultation at a series of public meetings to be held throughout the city between October 2009 and June 2010. To keep informed of the process, including upcoming meetings, residents are encouraged to join the PlanPhx mailing list or follow its Twitter feed. 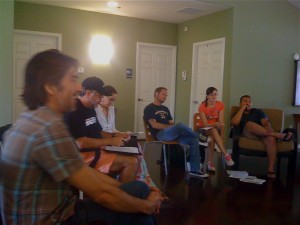 Also discussed at the meeting was a follow up to the April 2004 summit. This event resulted in a document that outlined many of the priority issues that the coalition has been addressing over the past five years. Given all that has changed in and around Downtown since 2004, it was thought that it was time to hold another community event. Planning is still in its early stages, but DVC is exploring locations and dates for an early December event. Stay tuned for more details as they become available.

Other business that was discussed included an overview of the upcoming Park(ing) Day activities in Downtown Phoenix on Friday, September 18; a brief introduction to an ASU project to create infill development in Downtown Phoenix; and a discussion of the economic and community impacts of Phoenix Sky Harbor Airport’s contract renewals.

Overall, the meeting certainly lived up to its billing as a lively discussion of issues that matter to Downtown Phoenix. The next meeting will occur on October 10. The Roosevelt Commons meeting room is located at 825 N. 6th Ave.