Phoenix residents might consider themselves lucky to live along the 131 miles of canals, some of the only waterfront property in the Valley. That excitement is tempered a bit when one actually looks at some stretches of the canals.

I live along the Grand Canal, between Central and 7th avenues, just south of Camelback. Along this part of the canal, murky water carries trash of all sorts past construction cones, signs, shopping carts and even the occasional baby stroller — all larger and heavier than the water can carry. Debris catches along the overturned shopping carts, creating rippling currents.

While one saving grace is the ducks and fish (added by SRP as a sustainable and ecologically friendly way to keep the canals free of weeds), the canals are also vandalized and trashed. Fences and walls mark much of the banks between private and public property, and some of the areas are hotspots for graffiti artists and high school students looking for a place to get high after school.

And, this writer wouldn’t walk along them at night, period.

Instead of dusty banks and miles of drab anti-landscape, Phoenicians would have a city that resembles Amsterdam or Venice along its canal banks, if Nan Ellin, Director of Canalscape, has anything to do with it.

“Imagine restaurants and shops lining the canals, with homes and office space above them,” Ellin says. “There are lots of proposals to beautify the banks, and the essence of this project is creating vital hubs of activity along the canals.”

Dedicated to incorporating the vibe of each neighborhood along the canals into sustainable corridors, Canalscape looks to designers, planners, architects and students to fully utilize the canal’s space for living, working and playing. In November, the group will host an exhibition of an artist, planner and architect on how to create these spaces.

Ellin, who is also the Planning Program Director in the School of Geographical Sciences and Urban Planning at Arizona State University, has been a Phoenix resident for 12 years and sees an urban city that fully utilizes the Valley’s miles of canals as the perfect combination of utility and beauty. Stunning cities like Venice are known worldwide for their well-planned and canal-centric designs, and she thinks it would only benefit Phoenix if a similar plan were to happen here.

With increased business, visitors and residents, the economy would be stimulated and people would be aware of what was going on, keeping the areas along the canal safer. “With eyes on the canals, people who would go there and do illicit activity would go somewhere else,” Ellin says.

Jim Duncan, senior analyst in water engineering at SRP, agrees that projects that create multi-use spaces along the canal have many positive improvements.

“In terms of loitering and vagrancy and vandalism, most of that goes away when these projects go in,” Duncan says. “And, there’s usually far less trash and litter.”

SRP, which owns and manages the canal system, drains the canal one section at a time for maintenance and cleaning once a year. The draining generally occurs in the fall and winter when water demand is generally lower, according to John Keane, SRP’s senior environmental scientist. With SRP’s main obligation being water flow, he added that they’ll do special trash retrievals if collecting trash impedes the canal’s current.

“The canals became an increasingly single-use system. If you find a way to expand systems beyond their basic need, there’s a lot of public benefit to that,” says Edward Lebow, Phoenix Public Art Director. “Canals are a priority for the percent-for-art program. You have this beautiful system of infrastructure that delivers water to the Valley. And, as the city has urbanized, these corridors have become more important and significant.”

Ellin believes residents need to take a celebratory approach to water in the Valley.

“We’re only here because of the water,” she says. “We need to turn towards it and embrace it.”

The canals are at once a blend of urban inspiration and urban sprawl, both refreshing and depressing. To be sure, water in Arizona is a great thing, and the number one reason any of us are able to call Phoenix home. Some areas along the canal are beautiful, yet some are desperately not. As these projects move forward, more Downtown Phoenicians will have designed places close to home to escape vehicle-clogged streets and appreciate the waterfront. 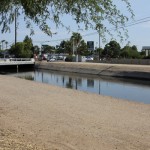 Projects like Canalscape would integrate the Valley’s canal systems in various ways around its communities. 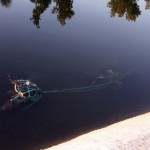 Two runaway shopping carts stuck in the canal mud between Central and 7th avenues collect trash that floats by. 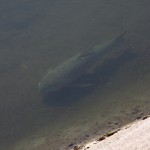 SRP added white amur, a type of carp native to China, to the canals in the mid-1980s to help keep weeds out.