The City of Phoenix released more information regarding the new Civic Space Park and its Grand Opening on Thursday.

The city of Phoenix, Arizona State University and community members will formally celebrate the grand opening of downtown’s newest park site, Downtown Civic Space Park, at 3 p.m. Thursday, April 16. The official dedication event will be part of a full day of informal activities from 11 a.m. to 8 p.m. to introduce the park to the public. The park also will host live music from 6:30 to 8:30 p.m. Friday, April 17 as part of Third Friday activities in and around downtown.

The Civic Space, nestled into 2.77 acres in the heart of downtown Phoenix in an area bounded by First and Central avenues and Van Buren and Fillmore streets, offers residents, workers, ASU students and downtown visitors a park with unique urban design, sustainable construction and operational features, and a landmark public sculpture by artist Janet Echelman.

The park, developed as a partnership between community members, the city of Phoenix and Arizona State University, utilizes sustainable design techniques to generate power, keep the area cool and capture rain water. Sustainable park features include:

Solar panels on the park’s shade structures will generate 75 kilowatts of power (enough to power 8-9 residential homes) to offset the park’s lighting and electrical needs.

Extensive shade; more than 70 percent of the park’s surface area will be shaded when its trees and vegetation reach maturity.

The Civic Space also boasts historic building space. A renovated city-owned building, commonly referred to as the A.E. England building for the business formerly housed there, will offer storefront retail and food options, space for meetings, presentations, small banquets, art events, classes, offices and restrooms. Crews are still at work on building renovations, which are tentatively scheduled for completion later this year.

Arizona State University and the Phoenix Parks and Recreation Department will collaborate to manage and program the building.

The project cost just over $34 million, divided roughly equally between land acquisition and design and construction, about 90 percent of which came from 2006 Parks and Historic Preservation bonds. Another 10 percent of funding came from the Phoenix Parks and Preserve Initiative.

The park has no parking spaces, encouraging pedestrian traffic from residents, students and downtown workers and visitors. Light rail stops along Central and First avenues and Central Station drop off rail and bus riders within feet of the park, encouraging use of nearby mass transit.

The park offers something for people of all ages. Interactive water and light features will delight kids, while permanent chess/checkers tables will be a gathering point for adults and children alike. Several shaded, hardscape areas of the park will be suitable sites for small concerts, performances, exhibits, movies or presentations. 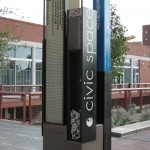 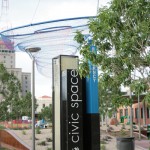 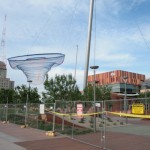 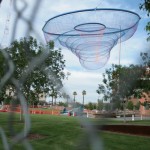 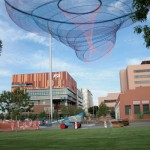