Is Photography a crime in Phoenix?

When writer and amateur photographer William J. Nash-McAdam and a friend drove from Mesa to Downtown Phoenix last weekend to take photos of the cityscape, they never imagined they would end up as subjects of a Homeland Security investigation. Nash-McAdam, who has been photographing the Valley for 14 years, and a friend parked at the Burton Barr Central Library and took the light rail to Central Station. Upon arriving at Central Station, they noticed that the blue rails of the Bloom structure looked nice against the backdrop of the Westward Ho. They took photos, cameras aimed high to capture the antenna on top of the building.

They were then approached by a Phoenix Police Department officer who was patrolling the station. According to Nash-McAdam, the officer asked them what they were doing, to which he replied that they were taking some photographs for personal use. The photographer states that the officer accused them of lying, and told them that he saw them taking pictures of a Federal Building that he claimed was located to the south of them, the exact opposite direction they would have been pointing their cameras to photograph the Westward Ho. Nash-McAdam states that he asked the officer which building he was referring to, but the officer refused to identify which specific building was the Federal Building in question.

When the officer finally let the two go, he left the photographers with a warning that he would be watching their activities.

While Nash-McAdam doesn’t think that this incident will keep him from visiting Downtown Phoenix in the future, he says that it has cemented his view that Phoenix is a “police state to me when held in comparison to my hometown of Orange County and the numerous other cities I’ve traveled to.”

“I find it ironic they’re building this art bloom right next to a federal building. Are they going to harass people who take pictures of this major point of interest that is being so touted by the mayor?”

One of the most disturbing parts of this story, besides the officer’s unwillingness to cite a specific statute they were in violation of, was his statement that the forbidden buildings are all around. Apparently, this means that virtually all photography could now be presumed to be banned in Downtown Phoenix.

Perhaps the reason the officer had so much difficulty in citing a statute that forbids the photographing of things as innocuous as a light pole, is because none exists. What it appears the officer was referring to was a joint FBI and Department of Homeland Security memo dated August 3, 2004, that requests local agencies “report information concerning suspicious or criminal activity to their local FBI Joint Terrorism Task Force (JTTF).” A copy of this memo is available on the website of a Wisconsin municipality. This memo contains a similar list of items that are identified as “critical infrastructure” including:

Unfortunately, incidents of photographer harassment are not limited to Phoenix. Jim Poulos, a train affecionado, has been told by officers in New York City that he was not allowed to take photographs in the Subway, when photography is explicitly permitted by an affirmative statute. Poulos has been collecting stories of photographers who have been wrongfully harassed by police at the War on Photography website. The stories, collected mainly from the United States, include one report, similar to the Phoenix incident, in which a photographer was questioned by FBI Agents for photographing in the general direction of an FBI building in downtown Amherst, NY. The site includes several accounts of harassment for taking photos on public transit from Chicago to Philadelphia.

BBC-affiliated journalist Greg Palast was criminally charged for photographing an ExxonMobil refinery in conjunction with a documentary about the living conditions of Katrina refugees. While the charges were ultimately dropped in his case, this kind of harassment of photographers by the authorities has a chilling effect on everyone who uses a camera.

Photography is not a crime. If the City of Phoenix wants a thriving, vibrant downtown, they need to instruct their police officers to relax their harassment of their guests who come to their streets–our streets–to capture the beauty that our city has to offer. 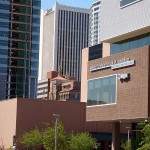 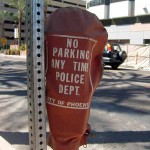