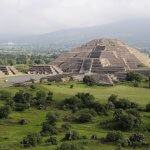 Wire*— Phoenix Art Museum will present Teotihuacan: City of Water, City of Fire, the first major U.S. exhibition on Teotihuacan in more than 20 years from October 6, 2018, through January 27, 2019 in Steele Gallery. This historic exhibition, organized by the Fine Arts Museums of San Francisco (FAMSF) and the Los Angeles County Museum of Art (LACMA), will showcase more than 200 artifacts and artworks from the UNESCO World Heritage site.

This exhibition presents a rare opportunity to experience both previously and recently excavated objects drawn from major collections in Mexico, many of which are on view in the United States for the first time and include mural fragments, religious offerings, reliefs, and more.

A contemporary of ancient Rome, which reached its height in 400 CE, the ancient metropolis of Teotihuacan is one of the largest and most important archaeological sites in the world and the most-visited archaeological site in Mexico. On view in the United States for its final run at Phoenix Art Museum, Teotihuacan: City of Water, City of Fire is a dynamic exploration of Teotihuacan as an urban environment, shedding new light on the striking parallels between urban life in the ancient Americas and life in contemporary cities. “It’s a privilege for us to host Teotihuacan: City of Water, City of Fire at Phoenix Art Museum,” said Amada Cruz, the Sybil Harrington Director and CEO of Phoenix Art Museum. “These objects have an important and timely cultural significance for our visitors, as they show us that the project of building communities, and the opportunities that come along with it, have an extensive history in proximity to our present-day home in Phoenix. We look forward to sharing these never-before-seen archaeological treasures with our community.”

Located approximately 30 miles outside of modern-day Mexico City, Teotihuacan was founded in the first century BCE near a set of natural springs in an otherwise arid corner of the Valley of Mexico. At its height a few centuries later, the city covered nearly eight square miles and featured enormous pyramids, long avenues, and residential compounds. Highlights of the exhibition will include monumental and ritual artifacts from both recent and historic excavations of the three largest pyramids at Teotihuacan—the Feathered Serpent Pyramid, the Moon Pyramid, and the Sun Pyramid. Ceramics and stone sculptures from the city’s apartment compounds, which were inhabited by diverse peoples from many parts of Mexico, will also be on view.

“Teotihuacan was an unrivaled civilization in its time and presents many parallels to our contemporary culture that help us re-imagine the nearly universal phenomenon of humans making cities,” said Matthew H. Robb, curator of the exhibition and chief curator of the Fowler Museum at UCLA. “Teotihuacan was a city in the modern sense of the word—a place where a multiethnic population was drawn together by many of the same social, religious, and economic ideas and forces that have long compelled people to create the clustering of monumental architecture and large-scale housing that we call cities.” “We know from these artifacts that features of life in Teotihuacan, including agriculture, a relatively high standard of living, and better economic opportunities, relate to the same phenomena that we experience in any large city today, from Phoenix to Beijing to Paris,” said Robb. “These objects show us how a successful civilization like Teotihuacan dealt with the challenges and opportunities that come with long-distance migration; how it used art to create a unifying identity for a diverse population is remarkable. Teotihuacan was a city far ahead of its time, and some of the lessons we’ve learned from these objects could apply to our own contemporary situation.”

The Mexican-led team of archaeologists who worked at the main pyramids includes specialists from around the world, including faculty from ASU’s Teotihuacan Research Laboratory (School of Human Evolution and Social Change). Together, they have made significant discoveries since the last major exhibition of Teotihuacan artifacts in the early 1990s. By bringing objects from various excavations together and encouraging visitors to understand the context of specific sites within the city, Teotihuacan: City of Water, City of Fire will provide visitors with a special chance to learn more about a significant place in the Americas’ historical and cultural landscape. Over the course of the exhibition in Phoenix, the Museum will partner with ASU and its world-class archaeology faculty to create community-wide, all-ages programming to enhance visitors’ experiences of these World Heritage archaeological treasures, on view for the first time in the state of Arizona.

About the Exhibition
Teotihuacan: City of Water, City of Fire will be on view from October 6, 2018 through January 27, 2019 in Steele Gallery. This exhibition is organized by the Fine Arts Museums of San Francisco and the Los Angeles County Museum of Art, in collaboration with the Secretaría de Cultura through the Instituto Nacional de Antropología e Historia de México. This exhibition has been made possible in part by a major grant from the National Endowment for the Humanities: Exploring the human endeavor. Any views, findings, conclusions, or recommendations expressed in this exhibition do not necessarily represent those of the National Endowment for the Humanities. For more details about the exhibition, please visit phxart.org/exhibition/teotihuacan.

This special engagement exhibition is free for Museum Members, and for veterans, active-duty, and retired military and youth aged 5 and under.  General admission:
$23 — Adults
$20 — Senior Citizens (Ages 65+)
$18 — Students (with ID)
$14 — Children (Ages 6-17)