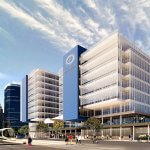 Wire*—Phoenix’s health care landscape is about to change dramatically — as is one of Phoenix’s most iconic properties.

Creighton University – a Jesuit, Catholic University located in Omaha, Nebraska – has reached an agreement on the construction of a new, nearly $100 million health sciences campus at Park Central in midtown Phoenix, a significant expansion of the University’s current presence in the state.

Phase one of the project includes a new building totaling 200,000 square feet and eventually will house nearly 800 Creighton health sciences students in Arizona. The expansion will include a four-year medical school, nursing school, occupational and physical therapy schools, pharmacy school, physician assistant school and emergency medical services program. A second building adjacent to the first may be added in the future.

In the interim, Creighton University’s College of Nursing, which launched its first Phoenix-based Accelerated Bachelor of Science in Nursing program in January, will move into a temporary home at Park Central effective January 2019. The School of Medicine, which first came to Phoenix in 2009, will continue operating its third- and fourth-year programs out of space adjacent to Dignity Heath St. Joseph’s Hospital and Medical Center until construction is completed in Spring 2021.

The new Phoenix campus for Creighton will meet the University’s current needs while providing ample room for expansion in the future, and the central Phoenix location makes it convenient for students doing their residencies and other studies at nearby hospitals.

“Creighton University is preparing for an exciting new era in Phoenix, one that combines our tradition for educational excellence in the health sciences with our distinctive Jesuit, Catholic mission,” said the Rev. Daniel S. Hendrickson, SJ, PhD, president of Creighton University. “Creighton University has strong connections to the Arizona medical community, and we look forward to expanding our impact by educating many more exceptionally qualified health care professionals to serve the community moving forward.”

Additionally, the four partners have formed the Creighton University-Arizona Health Education Alliance, which was officially launched on Sept. 1, 2017. It is designed to improve and expand current health education programs offered by each of the entities. The Alliance will also develop new academic and clinical education programs in medicine, nursing, pharmacy and allied health. The Alliance’s activities will also be based out of the new Park Central facility.

Governor Doug Ducey, who officially recognized Creighton University’s contributions to the State of Arizona with a proclamation, hailed the Creighton expansion as a significant addition to the state’s health care infrastructure.

“For more than a decade, Creighton University has been a key partner in helping Arizona train highly skilled health care professionals,” said Gov. Ducey.“Their significant new expansion and investment will help to meet our state’s growing need for health care professionals in the coming years, and it’s yet one more way that Arizona is solidifying its reputation as a premier destination for excellence in health care.”

The new Creighton University facility is also a significant boost for the revitalization of Park Central. Sharon Harper, president & CEO of Plaza Companies — which is redeveloping Park Central in partnership with Holualoa Companies — said Creighton is an ideal fit for the project.

“The new Park Central will have a focus not only on the creation of world-class office, retail and public spaces, but also on a commitment to health and innovation,” Harper said. “Creighton University’s commitment to innovating in health care education makes it a great partner, and we couldn’t be more pleased to have them join the Park Central family.”

“Creighton’s investment in our community will create new jobs and bring new life to a critical property in the heart of midtown Phoenix—but what’s more, it moves us closer to transforming our economy into one rooted in competitive, forward-thinking industries,” said Williams. “I want Phoenix to be a destination for world-class medical education, research, health care and solutions, and our growing partnership with Creighton University is going to help us get there.”

“Creighton University has long had a presence in Greater Phoenix, but their decision to continue expanding here is an indication of the growth and demand we’re seeing in the industry regionally,” said Chris Camacho, president & CEO of Greater Phoenix Economic Council. “As one of the most innovative medical schools, graduates of their health sciences programs will continue to feed the rapidly growing health care sector.”